Below are recommended steps for exporting your Hype document for use on the Adwords platform. You won’t need to do anything special beyond the steps below:

Note: This script does no support the ExitAPI, so the entire creative will be clickable. You may see an error. The error you may see is: Your click was successful and should track correctly Warning: This creative is not using the ExitApi. The Google-hosted ExitApi is required to make a select area of the creative clickable. Without the ExitApi, a click on any portion of the creative will click through to the landing page set in AdWords. If this is intended, please note your click was successful and should track correctly.

If you’d like to avoid using the Hype Export script, below is a list of things the export script above takes care of for you:

If you have any other recommendations, please reply below.

Has been moved to feature request… see below.

@MaxZieb Have posted another topic with what you wrote above under feature requests. I felt it was more pertinent under there rather than here. (@Daniel)

Original Post by @MaxZieb, copied here so that it's under Feature Requests. Max wrote: 1a) Please add an option in the advanced exported to set the meta according to each scene-size. Currently HTML head is global also for scene wise export. Adwords wants… Having more then one banner dimension in a hype document as scenes… makes a lot of editing necessary after doing the advanced export. (1b) Even more flexible would be the much overdue HTML-templates for Hype (much like Flash used to have)…

Anyone want to test an export script for Adwords?

Here’s an export script you can try: It inlines the generated JS code and ads the ad.size code at the top of the page (and makes a zip file for you) in one click. Here’s how to use it: http://tumult.com/hype/export-scripts/ If it works well for you we’ll add it to our list of export scripts.

Can you make it an executable much like what you guys did with the DoubleClick Studio?

@Daniel could you update the template file. The ExitAPI works best without the script in the HTML HEAD. 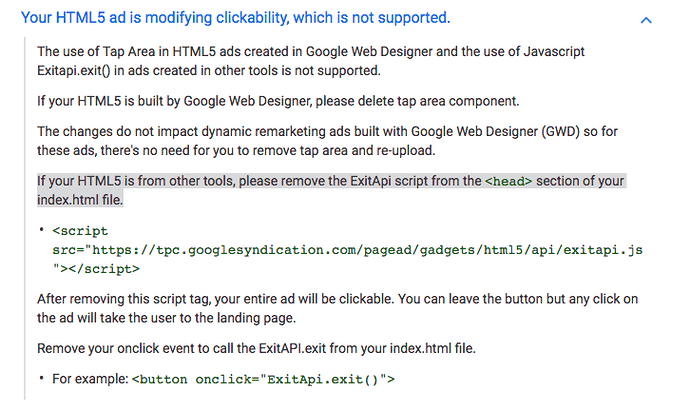 I don’t have any exitapi.js script in the <head>...</head> but maybe you’re using something else?

Can you make it an executable much like what you guys did with the DoubleClick Studio?

Sorry I missed this! I’ll need some help for that part

no, I used to one still connected in your first post:
Point nr. 4.

I am referring to this hype-document. This could be a skeleton in your post.

I don’t have any exitapi.js script in the <head>...</head> but maybe you’re using something else?

To be honest, I used google ads once or twice and I hated the whole experience with export scripts and changing of the guidelines every now and then, its a mess. This is not to say its Tumults fault, not at all its google ads. I was thinking maybe Tumult can monitor the changes that google ads makes and update the export script in real time via a OSx notifications to reload the script so one can feel at ease know the script works?

We are not able to test our export scripts every hour nor does Google tell us when they make a breaking change, but we do listen to issues our community (you) experiences. So when you hit an issue, holler at us.

Jonathan built in auto updating into the scripts so they will stay current but we won’t update them if we don’t hear about issues (since we dont produce ads).

I dont know how you monitor for changes, but one way of monitoring would be if you upload the same ad everyday to see if it checks out via the validator and if there is a change you can update and push to everyone without the need for a user download and reimport it to hype? If this is already the current process than thats great

I dont know how you monitor for changes

He just mentioned it

they listen to customer feedback and change if need to via , for example, this thread.

Hype isn’t just for ads so imagine having to test for every situation. There would be no time for updating it

That is what these forums are for. If you have a problem, let it be known and if someone can fix, they will

Correct, if you can relate to where I’m coming from you can maybe guess where I was going with the above suggestion.

I’ve been in a situation where one of my colleagues ran in and asked, ‘can you export this ad to google ads?’ my response was, sure!

So there I was, trying to export with the script from hype and time and time again google wouldn’t accept it. I set a certain expectation for both of us at that time, but the time we’ve spent trying to make it work was a kind of a waste, because google had updated its guidelines two months or so ago and it wasn’t updated on Tumult’s site.

@Daniel was kind enough to get it to work and I was very thankful for his on demand support mind you this was not via forum or email. I feel bad to even share this.

The expectation from Hype - ‘you can export using scripts’ but at that time the script was not working. That was quite unfortunate.

Now, I’m not saying it’s Tumults fault. Due the nature of ad servers and their need to update parameters every now and then I feel like someone needs to be on top of it, meaning, It could be any one of us.

Forums are great place to get answers which can lead to a possible resolution that’s a given. However, the time it takes for a resolution if your working for a company based on deadlines is a big deal.

I also understand that I’m not the only one with my question to be resolved.

Just so everyone knows:
3 Validator systems there are at Google. Yoda was here.

The expectation from Hype - ‘you can export using scripts’ but at that time the script was not working. That was quite unfortunate.

We actually didn’t have an official adwords export script so part of the conversation with you was getting this modified from a different Google Ads script to be compatible with Adwords.

because google had updated its guidelines two months or so ago and it wasn’t updated on Tumult’s site.

It seems like Adwords might be updated the least. As of today, I’m getting all green lights. The last major change was just related to the removal of one line of code, so they seem to be simplifying things (which is good).

This should be an official export script soon.

3 Validator systems there are at Google. Yoda was here.

@Daniel, I wouldn’t have brought this up if it wasn’t for Dbear. @Bendora beginning of this year and late last year the validation may’ve not been as sophisticated as it is today.

No sweat, Pete! A point I want to make here is that I have no problem helping folks get cool stuff done with Hype – that’s literally what I’m here for. And if a new export script comes out of our work in private that we can share with everyone in the world, even better!

But I also want to highlight that these export scripts need to be used so that we know when they don’t work anymore – that’s why we are making sure they are hosted on Github where anyone can submit pull requests which benefits everyone.

We’ve posted an AdWords Export Script on the site. Please give it a try and let us know if you encounter any issues.

This is pretty much Daniel’s prior script with a few minor changes and a nice way to install.

I just dowloaded the script but now I don’t see it as an HTML5 export option. Is there any way to add it? I currently have “folder…” and “dashboard/ibooks” as my two options when I hover over “Export as HTML5”