Extension that easily offers to listen to a multitude of events and execute code based on these events. The declaration is as simple as assigning a key and value in the attributes panel (using data attributes). Furthermore, it offers code execution through the Custom Behavior interface.

The extension consists of two parts, being Actions and Events. The action part was born out of the necessity to trigger Hype functions and was in a first alpha used in Hype Gesture (only a simple string parser). Now, Actions have matured to be full JavaScript, adding additional benefits in the process. One of them being, small JavaScript snippets wrapped in a Hype Function, only doing some little thing and not worth a full Function in the resource library. The main action related function to consider is:

Code can be an JavaScript statement or just a simple function call. For example:

The second parts are events that trigger actions for you, without you having to use hypeDocument.triggerAction. This part is certainly the most prevalent to grow in coming releases, but already supports a bunch of use-cases. You can trigger actions whenever you have access to the custom behavior. This would include the Actions inspector, Scene Inspector, Symbol Inspector and the Timeline Actions.

magic rule set: If a variable is not existent in execution context, it will be created on the fly. In the following example, the variable counter didn't exist previously, and will now be created in hypeDocument.customData and any subsequent actions referencing it will modify the value there.

Under the hood, variables are mapped to hypeDocument.customData.The example illustrates creating a counter variable using On Prepare For Display using the Scene Inspector

Going forward, we can now modify the counter as seen in the next screenshot. The variable counter is being incremented and then assigned to innerHTML of an rectangle with the id "display". Furthermore, on every fifth count, startTimelineNamed('bounce') is triggered. 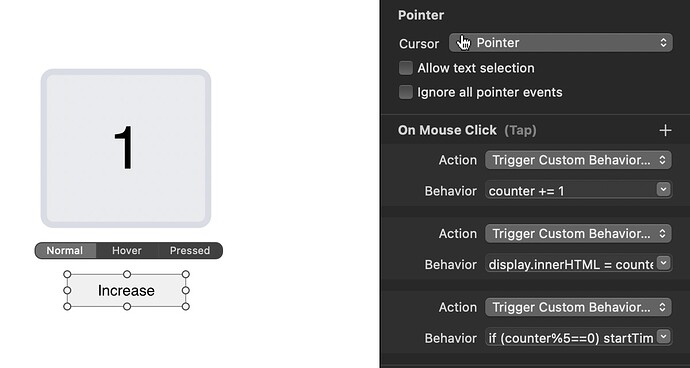 Screenshot using Hype Action Events in the Trigger Custom Behavior interface, in this case it is the Actions Inspector panel.
Example_Code_in_Custom_Behavior.hype.zip (19,7 KB)

One thing that should be interesting to anybody whoever used the Hype API is, that the prefix hypeDocument is missing. To save space, the triggerAction interface offers a "smart" and direct access to the function by creating an execution context. This context depends on and is mostly hypeDocument, but can also be symbolInstance given the location and way hypeDocument.triggerAction is used.

Always available are all function found in hypeDocument (Hype Document API) or the symbolInstance (Symbol Instance API) depending on the calling context and all functions found under hypeDocument.function() in a bound manner. All the methods there in can be called directly (like startTimelineNamed etc.).

Even though there is some Proxy magic at work, you can always use explicit contextual variables to be sure what you're accessing.

In the spirit of saving space, these explicit contextual variables are offered in a shorthand form and automatically available in an triggerAction context.

Even if the original signature is a little long for attribute notation, it is now supported to allow transferring code back and forth between the code editor and direct notation in data attributes easier

Some cases require you to pass some variables in the options like the element or event when called directly from JavaScript.

Here is a list of all the current options that can be passed in:

It is possible to subscribe specific DOM events using data attributes. The full list out of the box is: 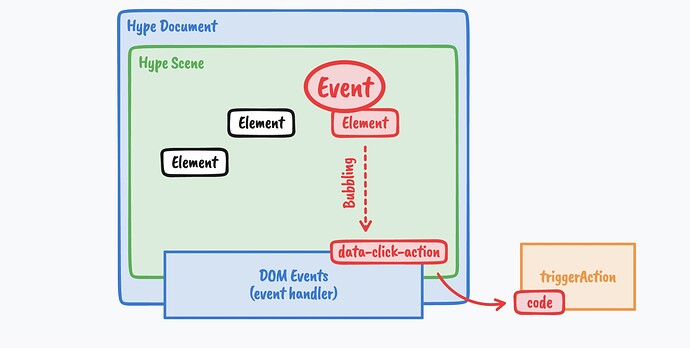 As seen in the chart, events are emitted on the element and bubble down to the base of the Hype document. The event handler there extracts the code from the data attribute and passes it on to triggerAction to be processed.

Furthermore, you can subscribe elements to Matter events being:

It is possible to subscribe elements to multiple Hype events using data attributes. The list of currently supported Hype events is as follows.
new since 1.0.2

Also, allowing to subscribe to specific behavior: behavior names are lower cased and spaces/tabs are replaced with dash. Hence, a behavior like Hello World --- Test would become hello-world-test and the full action hook would be data-behavior-hello-world-test-action

As seen in this chart, global events are captured on the Hype scene base and the appropriate event handler searches for elements in the scene subscribing to the particular event and forwards the code to triggerAction to be processed.

Subscribe to a supported event using a data attribute

To subscribe, add a data attribute to an element as follows: data-EVENT-action.
For example, to subscribe and element to a click event, you would add an attribute called data-click-action and set the value to some code like alert("You clicked me!");.
Example_Trigger_Action_with_Data_Attribute.hype.zip (35,8 KB)

I intentionally also chose click to illustrate the difference of these DOM events versus using built in Actions under the Actions Inspector. There is not a full parity, but some overlap. Hype Action Events are bound to a bubbled event and don't include fallback logic like interpreting a click as a touch given the device type. Subscribing through the data attribute is in these cases very explicit and intentional. In other cases, Hype Action Events offers events not easily available and manages the listeners. This is only scratching the surface … more documentation coming soon

Errors are trapped in a try/catch block and in production fail silently. When previewing your code in the browser directly from Tumult Hype you get information about errors directly in the console:

This is the information you are being shown:

If you need the error information after you have exported your Hype project or need to debug on a production system, you can always force errors to be shown by setting:

This release marks a move to a Proxy approach. Meaning, it drops support for IE as that interface is not supported on that Legacy Browser. If you really need to support IE you can still enable use:

If this mode is enabled, all variables that are not called contextually are generated in the window scope. For single Hype applications, that shouldn't be a problem and furthermore can be avoided by adding a context variable (customData.myVariable instead of myVariable. See above regarding context variables.

I think it will be very useful. Thank you

There was a slight regression on the contextual variables since the introduction of the proxy approach in version 1.0.2 ($evt, $sym, $doc, $ctx and $elm where not property resolved), but this has been fixed as well. More examples and documentation soon.

Additional note: the custom behavior context is fired in an agnostic context, so it doesn’t contain an element (and $elm) and the event is a custom behavior context. That is duo to the way Hype handles this internally. The triggerAction interface exposure through custom behavior is at this point an added bonus, with said minor inconveniences like not being aware where it was fired. If you require that context to be populated, just use the data-EVENT-action on an element.

this project is stunning

Interesting talk on events, the main loop and how processing of them has evolved …

↑ look at project
1.0.4 Added the event.symbolInstance to Hype function calls if present

↑ look at project
1.0.5 Fixed typo that prevented collision events to be detected
Make sure to purge your Browser cache and restart Hype when using examples after I made an GitHub update!

Here is a simple shadow animation driven by the ball element
Example_Data_Attribute_Matter_Animation_Frame.hype.zip (29,3 KB)

* behavior names are lower cased and spaces/tabs are replaced with dash. Hence, a behavior like Hello World --- Test would become hello-world-test and the full action hook would be data-behavior-hello-world-test-action

Here is a simple switch button using hypeDocument.triggerAction and also showing how Hype Action Event triggers a function handler named like a symbol if found on HypeSymbolLoad and HypeSymbolUnload (proactive).

1.0.8 Bugfix on data-timeline-complete-action for particular timelines

This example uses Hype Action Events, Hype Matter Helper and Hype Drag Gesture to offer drag and drop support with precise drop zones and snapping. Note that this drag'n'drop approach relies on the Matter engine offered by Tumult Hype to determine arbitrary shape intersections. Hence, the export will include the physics engine.

This gesture offers the following events:

And the following selector defining the drop target

This example also uses a snapping mechanism, data-snap-target, but that is specific to this particular example and implemented in the document rather than being part of the gesture.

With this demo, I am actually not so sure if I do it in such a way in an actual production (hence, the title of experiment). I would probably rather have the entire sticky element be one symbol and use a progress function. In this example file, there is a lot of whitespace just to have room to scroll to drive progress.

The following data attributes can be used to control the behavior of the scroll progress handler:

data-sticky-start: This attribute allows you to set a custom start position for the element's sticky behavior. If this attribute is not set, the element will become sticky when it reaches the top of the page.

data-sticky-end:
This attribute allows you to set a custom end position for the element's sticky behavior. If this attribute is not set, the element will remain sticky until the user scrolls to the bottom of the page.

There is a little progress handler action in the example as well (bonus):

data-progress-start:
The top position (in pixels) of the scrollable area.

data-progress-end:
The bottom position (in pixels) of the scrollable area.

data-progress-timeline:
The name of the timeline to be played (defaults to main timeline)

This example is a refactored version of the custom continueAfterDrag functionality. It offers more options and settings than the regular version, built in to Hype.

This gesture offers the following events:

The following config options are available

Here is an example using the hand drawn US map from @blur (Kevin). It uses Hype Action Events and Hype Dynamic Camera. The cool thing, it uses data-intersection-action to hide map parts currently not visible on stage. As seen in this video, where I make the stage overflow visible at the end to illustrate this feature. Example_using_Hype_Action_Events_and_Hype_Dynamic_Camera.hype.zip (230,8 KB)

How to trigger a "No Internet" Warning Pop-up?