I’m making an animated video destined for YouTube. I would like certain visual aspects to sync with the audio. I can’t see any way to do this in Hype and am considering taking the animation .MP4 into Final Cut Pro for fine tuning - unless there is another way?

If you have a single long audio track and the final video will be for Youtube, I think you should build your animations, export a series of MP4s, and do your syncing with the audio in Final Cut. There’s no one-click method to sync up animations to audio without doing a great deal of previewing + retiming in Hype.

There’s two methods to do this in Hype:

What I am understanding from your post:
You are looking to have the audio have its own timeline in Hype so You can create your animations in sync with it.

e.g. A two minute audio will have a visible presence on Hype’s timeline that runs for two minutes.

What I have done in my projects is to convert my audio to an “.mp4” using QuickTime 7 Pro (what a great editor!) - other programs would suffice I’m sure. Note: Make sure the file does not have an audio suffix - i.e. “.m4a”.

Now what we have is a video (but no visuals) that shows up in the Hype timeline in a linear fashion. Of course You can add more audio “.mp4’s” as desired.

Drag the “.mp4” audio file on to the Hype stage (“Animation pane”). A media player will then show up which you can drag off stage. With the “.mp4” file selected go to the “Element Inspector” where You will have the option to turn off “Autoplay” as well as hide the media player controls. However, hiding the controls does not remove its visible influence from the project, so I like to simply keep it off screen.

You don’t necessarily have to keep the audio in your final output - it can be simply used as a guide during the creation process in Hype.

The audio (“AudioDemo.mp4”) in the attached Hype Project started out in life as an “.mp3” which I converted using the process described above. The media player is off screen to the lower right. For the purposes of the demo I have the “AudioDemo.mp4” set to “Autoplay”.


Note for future reference (not shown in the Demo): You can also have the animation synced to an audio media player’s timeline for use on a web page. So the audio player is visible and dragging its timeline will also move the animation’s timeline to match - or when playing - both timelines are in sync.

Thanks for the tip, Jim. This assumes that there is only one scene? I have multiple scenes and Hype can’t traverse scenes natively. I have a mixture of animation sequences which are not very flexible timing wise but these are interspersed with text captions, which I can shorten or lengthen as needed.

You can have more than one scene - just drop-in the appropriate audio track.

Not clear what You mean “Hype cannot traverse scenes natively”.

Whether for HTML or “.mp4” output I do not have trouble moving from scene to scene. You would of course need to add the audio afterwards for the video export (the audio that you synced in the Hype project).

I asked in another thread if it was possible to play-on from one scene to the next in the editor and I was told that it wasn’t. It does when you preview or export to HTML or .MP4 but within the editor itself, play stops at the end of a scene. You have to go to the next scene manually, which makes syncing music across scenes difficult. Your demo (thanks, by the way) doesn’t play the second scene in the editor and the audio stops at the end of the scene 1 timeline.

Yes, You do have to Preview to see the Scene transition - as with many things in Hype a Preview is required. (So that is what You meant by “natively” - i.e. the Editor.)

If You need continuity in the Editor why not just have one scene? You can fake transitions.

I’m not using transitions but the animation is quite complex and breaking it down into manageable chunks (scenes) keeps me sane(ish). I will try copying and pasting my scenes into one long timeline near the end but I am used to doing animations in FCP so I will probably do my syncing there. Thanks for your help.

I’m not using transitions but the animation is quite complex and breaking it down into manageable chunks (scenes) keeps me sane(ish).

You can use a “Group” as an organizing tool instead of Scenes. When the “Group” folder is collapsed none of the animated properties will show - keeping the timeline from being overwhelming.

Then You can click the “eye” icon (on the Timeline layers) for a Group’s folder to remove the Group’s contents from the Stage - which cuts down the visual clutter in that regard.

These features allow you to display on the Timeline or Stage what You want at any given time.

I’ve worked with a single Scene having over 10 “Mini Scenes” with 120+ elements including video, audio, images, graphics, text, symbols, etc. and managed to avoid insanity with this approach. All was organized into discrete logical units. Please see the below screen shot. 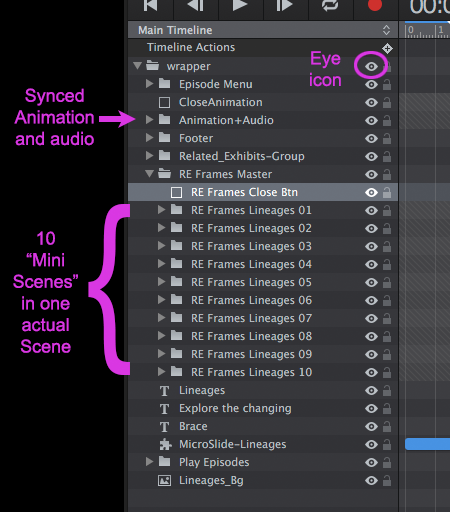 Okay, groups. How can I convert my ten scenes into groups on the same timeline? Copying and pasting a timeline seems to just create a duplicate scene.

Example:
Select the elements from Scene “2”; group them and name the group with a naming scheme that works for You; select this group and choose “Copy” from the “Edit” menu.

Go to Scene “A” place the playhead at the appropriate time location on the “Main Timeline” and choose “Paste with Animations” from the “Edit” menu.

Repeat these steps for the other Secondary Scenes.


This is the general idea. Since I am not privy to all the permutations in your project, there possibly will need to be tweaks to this basic process to accommodate your project’s set-up.

Note: What I am suggesting above is not how I built my example shown in my previous post with the “Mini Scenes”. I created that Scene from scratch - not by copying & pasting other Scenes.


If this approach presents too many issues for whatever reason the exporting of individual scenes to “.mp4” and assembling in FCP as Daniel suggested in his post above would be a fallback; but of course everything is in pieces which You were trying to avoid to begin with.

Many thanks Jim. That works well. ;?)

This has been bothering me for a while, as well. But I think I came up with a simple workaround. I had created my soundtrack in Logic, and wanted to animate a character speaking the vocals. So I took a screen grab of the Logic track along with the timeline readout. I opened that PNG in Preview and lined it up underneath my Hype project so that the Hype timeline lined up with the Logic timeline. Voila! As long as I don’t move either window, I have a clear idea of where the dialogue is and can sync it up with keyframes in Hype.

Play audio in preview for timing (show as a waveform)

@David6816 @stephen and All! In addition to getting the sound to play in the Hype environment (i.e. no Preview required) I have found a way to include the sound’s waveform as well. The process is tad kludgey but with a minimum of practice the whole procedure takes roughly a minute to perform for a given soundtrack, whatever its length. The benefit of having the waveform visible in extended tracks (along with hearing the sound) is it allows the animator to visualize where the inflections are in…

Thanks, Jim! I’ll give that a try.

You can create your markers in FC, export the project to QTP (w/o video), then extract the marker track and save it as text. It will give you the time position of each marker. This can be used to set keyframes. There are most likely other factors that could screw up the sync, but this is one way to track the timing.

I use text-highlighting in our interactive storybooks build with Hype and used an audio-editor (like Pro Tools) where I switched the timeline to 30fps. Got the start- and end-timecode of a selected syllable and used this info to animate this in Hype. It’s a lot of work, but doable.

I whipped together a little demo of my method for frame-by-frame animation synced with a pre-made audio track:

You can create an audio track waveform visual in Hype for your animation~lip sync needs.


Steps for syncing an existing audio track into Hype:

1) Using “QuickTime 10” I did a Screen Recording of my audio editor playing the track.

2) Trimmed mouse movements that were part of setting up the Screen Recording - leaving just the portion where the audio is actually playing.

3) Save this QT file (named “JaySnd3.mov” in the Demo) and import into Hype. We don’t care this is a “.mov” file because it is just used for reference in the lip syncing.

In the image below we are looking at a Screen Capture from the Hype Interface showing the matchup between the QT file “JaySnd3” and Hype’s timeline.

_A screen recording in the Hype app showing the sync between the timeline & the audio track:_
Previewing within Hype and Masking imported objects or pictures
Can We Create Action After Audio Play?
jducharme (Jay Ducharme) May 25, 2017, 1:27pm #20

Hi Jim. You had mentioned this in an e-mail you sent me. I tried it. But when I processed the wave file in QT, it got horizontally compressed and I couldn’t re-stretch it back to its original size. I tried using it anyway and when I brought that MP4 file into Hype, I didn’t place it on the stage but on the timeline, where it appeared as a series of still frames (as it would in a movie editor). Placing it on the stage showed it in its compressed form, making it useless.

The file you attached does seem to work, so I must be doing something wrong. I’ll keep playing around with it. Thanks!