I was thinking in the games that can be done with hype and I decided to make some, but in a different way so I start thinking in the generes and how to make them special. I merged the "shooting" games with "avoider" games in a "whack a mole" style game and the result is so fun.

My wife hate shooters but she was playing yesterday trying to beat my son score and that was amazing for me, so I decided to make more experiments with the same concept because there are to much things to try.

I have some demos, trying a Ninja fruit style or something as crazy as an RPG game with mouse, shooting and looting. All the games will have the name "busters" in some way, to make the clear difference between my one button games and my new "no buttons games". 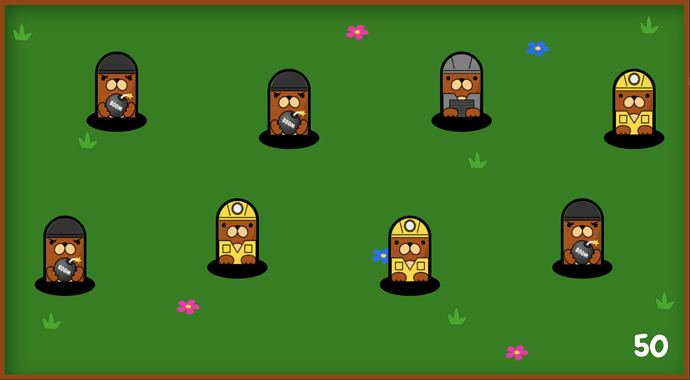 P.D.
I tried to make commercial games partnering with a couple of game companies using engines like Unreal, Unity and Construct 3, I wrote 3 complete game briefs for the development, and it was a very bad experience, so I decided to go back to the things I know like "Hype", I know I can make fun games with it. Maybe in the future I'll pay to developers to make my games, but now, let's just have some fun.

My first few attempts were comically bad, but then I got the hang of avoiding the booms.

Maybe you could add something like a maximum point value per level, such that the level ends once enough moles have been presented with that point value. (Like 10,000 possible points will be presented). This way users can get a % completeness score. Also with levels you can gradually increase difficulty like time the moles are presented, amount of booms shown, total points to get, etc.

Thanks for the nice comments!

I did so many things before releasing the game, like making a version with 10 lives, so you can't miss a mole or loose a life, that makes you move faster and all the time, but my problem was that the moles with bombs also were taking lives (I need some variables to control that), then I tried with % so you could beat score and precision, but I had the same problem with the bombs, so I start adding moles, begin with 3 and watch my family play and I end up with 8, and then I change the position of the moles because they where in 2 lines and that was too easy (I moved them a little bit).

I'll really consider your suggestions and start thinking in the ideas for this one and the ones I'm making related to the same mechanic.

Thanks again for the time playing and writing a feedback.

By the way, remember... I DON'T KNOW how to code Javascript, the only things I know are the same as always, just "variables" (for score), "Random numbers", and "If-else" to compare and thats it. Everything else is just animation and timelines in HYPE, the moles are just buttons and you need to rol over them to animate them.