Today I saw a facial expression controller made in Toonboom and it came to my mind that it is also used in Moho (with vectors) and I just discovered that it can also be made in After Effects.

It's what they call Master controller rig

Would it be possible to do it also in Hype? I'm aware that with programming it could be done a lot, but could it be done without programming?

I don't know if you could associate the movement of any line to control a character's blinking or change the expression of his mouth. Or if this is only possible with software that uses bones.

I give the examples: 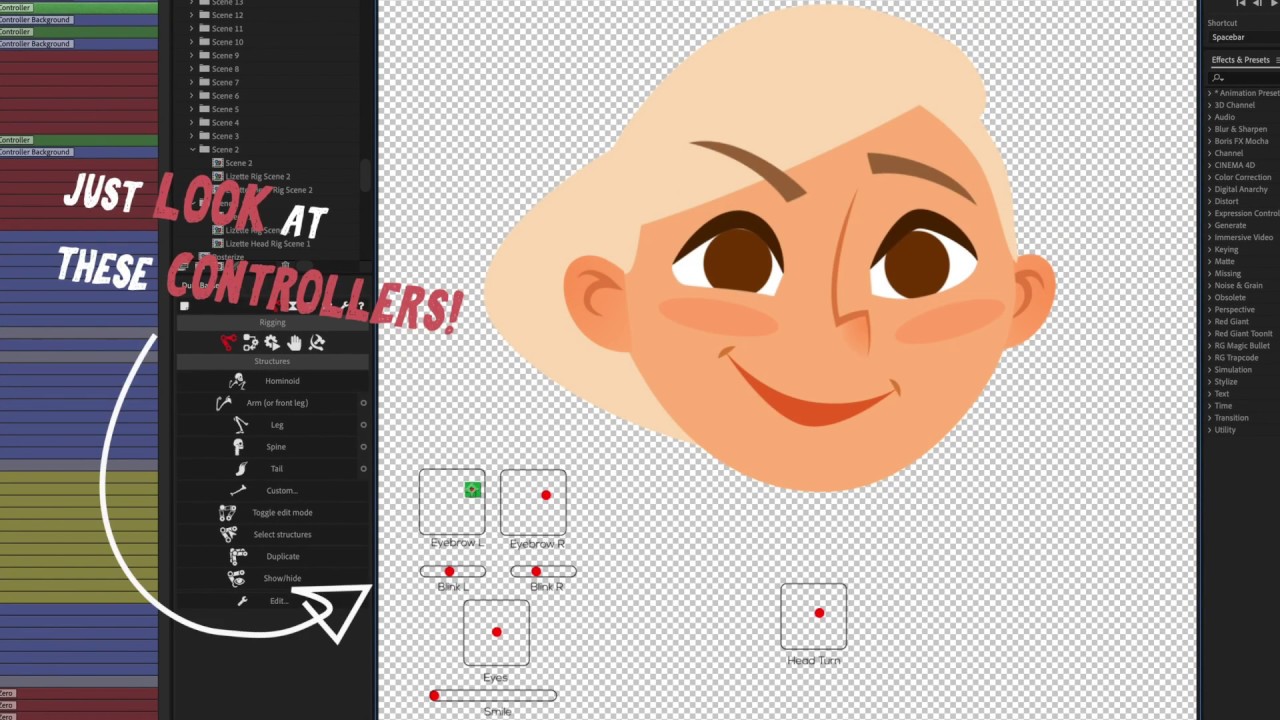 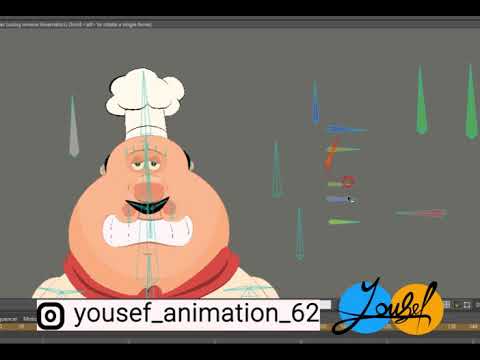 I know that Hype focuses more on web animation, but the example of AE is a good example of how it could be used on commercial websites, even when answering a survey with dynamic facial expressions, something much more attractive than voting by numbers.

I knew I had seen it!
But I couldn't find him again

And can it be used as a controller to make animation? That is, within Hype

And can it be used as a controller to make animation? That is, within Hype

but I'd say no

not with builtin capabilities ...

I was experimenting with on screen controls that hide when published. Would love to explore it more and have hype extendible with arbitrary properties with callbacks using the regular timelines in the future. There is as always an export script hack, thought.

This is a approach with „out of the box“ or with „built in possibilities“.

Hype still doesn’t offer custom values in the timeline. So if you need to put a handle onto a value that you can animate this thread is for you. Guest postings and ideas welcome! My first approach is to have on stage value sliders that hide on publication but still can be “read” and the transferred to whatever destination (function, attribute, library etc.) you need.

The word "never" does not exist in the creative vocabulary, let's leave it at "for the moment"

Very interesting approach. It makes me want to learn programming to help with this, but I have many fronts open already.

I definitely see the power in this approach and have an idea on the path forward that would work in Hype. That said, I've always personally found these specific ways rigs are formed to be clunkier than necessary and I'd probably like to experiment more with alternate UIs for indirect control as well

Adding to what @jonathan had noted one thing Hype already has and is in my opinion vastly underrated: you can use symbols as "actors" and the timelines in the symbols as scripts/behaviors/routines. Then you can use the Main Timeline of your scene as a storyboard with directions by triggering them using symbol actions.

My intuition that something was possible was awakened when I saw the Mockups Simulator of @michelangelo. I quickly thought of the example @h_classen gave of the animated emoticon, although I couldn't remember where I had seen it.

Maybe working with symbols as controllers, placing them outside the scene so that they don't appear on screen, could work. I still don't know if I'm talking nonsense, I'm just throwing out ideas.

HI guys, I would share another template. I made a simple Mockups simulator with the view of three sides, useful for prototyping. [hype_template_mockups_simulator_2] Template content: Hype elements Options: Change color, perspective distortion and graphics. Actions: Click Elements: Hype Timelines for perspective + Custom Behavior for Color and Graphics + nested symbols Note: The group’s position is related to the perspective deformation. The is a trick to control the perspective f…

My first approach is to have on stage value sliders that hide on publication but still can be “read” and the transferred to whatever destination (function, attribute, library etc.) you need.

This is exactly what I do for Grids that I import. The grid is a symbol that has all of the guildes I want (going beyond the hype grid tools), and then I have an animation that hides them when launched, that is, On Scene Load.

Sorry no solution for the actual rigging though!

I wanted this for a few years ... I have already suggested that opening a javascript scripting for ui and animation can create several projects ... For example, Unity 3d already exists and did thousands of scripting ... It's incredible. <

I did something similar but it is not within hype.

It is a platform to create sign language signs for deaf people … this design is ideal for children with deaf and deafblind children. I think it’s a lot of fun. Advantages: It is very well accessible for children with disabilities Disadvantages: Cannot do rigging or Bone arm from shoulder to hand to understand much better It is very complicated with animation in grouping “mouth” with tooth and lips. I should make order first lips, second with teeth and last is language that can work very…

@Casimiro Wow! That project looks very interesting. And no code

The link doesn't seem to work

Sorry, moved it to the public forum (was in the beta section) into feature requests. Please try again.

I have seen that this feature is available in Cavalry along with some other quite interesting ones.

I report it in case it could be implemented at some point.

The main problem is that we can't communicate from the WebKit view with Hype, there is no API (yet). Meaning, no ability to use the API or trigger/preview timelines with extensions. Although, you can use a mutation observer to hook up one moving element to another. That becomes a bit tricky as transformations use Matrix math, but you can parse the transform string with something along these lines…

…and reapply it in a tweaked/processed way to another element using a Mutation Observer. A good helper extension is https://github.com/worldoptimizer/HypeDataDecorator as it allows to set up Mutation Observer that run in the IDE and after exporting.

I have seen that this feature is available in Cavalry

This is a great software and highly open for tweaking and property linking in the IDE. It was pushed by the people behind School of Motion. It doesn't do HTML exports, though.

Thank you very much Max for the clarification and the contribution.
I had not seen that Cavalry does not export to HTML, an important point.