If the weekend goes well, the book and the template should be online by Tuesday

It’s looking more like next Tuesday, not this Tuesday. There’s a bit more work involved in this project than I anticipated. And since I like how it’s turning out, I don’t want to rush it.

UPDATE: OK, I’m having trouble getting my book app approved by Apple. That ruins the excitement of the new template. As apparently, it’s not as useful as I thought it would be. Apple will very likely reject an app if it just looks like a regular book. They keep pointing me to the iBooks Store, but I think Revisions works a lot better as an app.

Regardless, the “book” template will be launched tomorrow.

Here are some features… 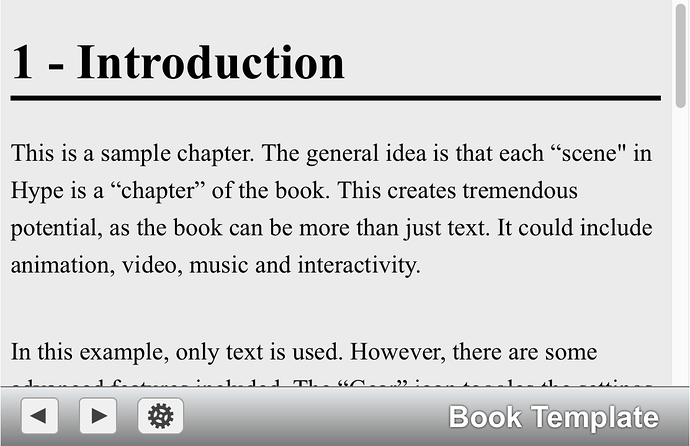 Based on the conversation here… How do I add a particle effect? …I created a simple – no coding – template / tutorial for adding particles to Hype projects.

Here’s just a minor update about the Free Hype Templates…

After adding a more effective way to display Hype projects on my website, I went back and reviewed the existing Hype Templates. I knew that some of them had display issues, but I didn’t get around to fixing them – until today!

There are updated FPS & FPS2 templates, so that they fit better on the page.

The trick was to hide the “Wall” elements in the overall “Group” element. Using the “scale behavior” with physics dramatically hurts performance, but that’s sorta the point for the FPS projects. It’s a stress test. On a modern computer, such as a MacBook Air 2017, it’s just too extreme… either too few frames or 60 FPS. Both hardware and software has improved since 2016. Using scaling recreates the intended effect.

7 posts were split to a new topic: How to add Google Fonts to the Photics “Book” Template?

If you didn’t already know, I’ve been working on a printed version of “A Book About Hype”. Since the book is to be printed, I’ll probably just post the templates on my website. I might start as soon as this Tuesday, making new templates available before you can buy the book.

I just realized that this could be a nice Christmas Eve gift to the community, so I’ll try to get the first template online this week. The “Origin” template is just a simple project, nothing too fancy. It’s the thought that counts.

Meanwhile, I’ve been trying to figure out the purpose of the “Use low latency Web Audio API” setting.

While experimenting with this feature, I realized something. “Hey, I can fix the ‘Coconut’ template!” Previously, the sound effect would lag. It didn’t sync with the coconut animation. The “low latency” option is great! Although, since modern web design/development is becoming a series of rules about things you can’t do, one doesn’t simply play audio on the Internet.

You need a chaser!

(I don’t drink, but it really is a great name for the effect.)

I added a dropping sound effect once the “drop coconut” button is pressed. The user interaction unlocks the ability to play audio. Now it should work in modern web browsers. With over 2,000 downloads, it’s the most downloaded template of the bunch. I’m surprised too, as I didn’t put that much effort into it. HA HA. Hard work is not directly proportional to success. Regardless, I felt that such a popular template should be respected. So, I fixed it. Enjoy!

Basically! Unchecking will use the HTML5 <audio> tag instead of the Web Audio API.

The most typical reason for unchecking this is that if an iPhone is set on mute, the Web Audio API will be silent, whereas the <audio> tag will still play audio. (There is a hack we’ve subsequently learned about and may put into Hype in a future release).

Beyond this, there are some rare contexts users have written about in which the Web Audio API can be buggy or not play at all and the best fix for users is to use the <audio> tag instead. The Web Audio API likely will also use more memory, which may an issue on larger documents on iOS.

There are some situations Hype will always use the <audio> tag regardless of the checkbox setting: having a browser that does not support the web audio api, being offline, being in an iBook, or viewing via a file:/// URL.

There is a hack we’ve subsequently learned about

Heh, the first reply is funny.

It is disgusting that this is possible or necessary.
– Matt Montag

Ha ha, I was just playing with my goofy coconut template and wondering why the Internet isn’t as fun now as it was years ago. There used to be silly animations and sound effects everywhere. Heh, difficulty in playing HTML5 audio is a big reason.

There are some situations Hype will always use the <audio> tag

…and it looks like less than IE9 defaults to QuickTime. (I’m not sure why anyone would be running less than IE9 though. Those browsers are long dead. Even Windows 7 is going to be end of life next month.)

The other information is good to know. Thanks!

The “Origin” template is available.

It’s a way to visualize how elements are arranged on an HTML grid. It’s not much, but it’s the start of a lot of new templates. The idea is that I’ll be posting new templates while working on the book. It’s also important to know how the “grid” works. (That was the original name for this template, but I gave it a Christmas theme.) 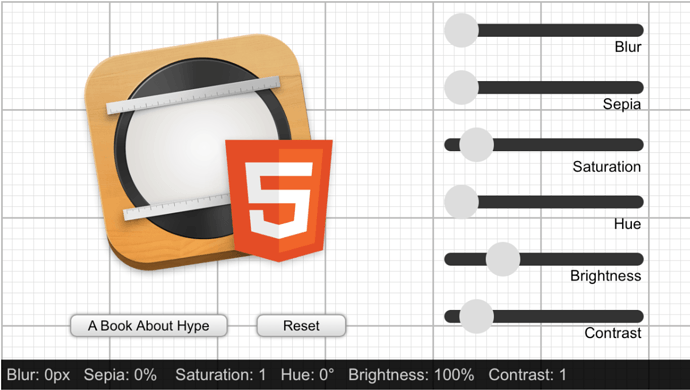 I think it’s better when the links occur naturally. Like this…

Besides, social media can be a major distraction. I need to be focused on finishing the book. The plan is to get the templates online, so that the book be printed. It’s about one per week for the next six months.

Is everyone OK with that?

Sure! Just thought might get some more eyeballs and build up. But then again … every approach is valid. Was in the Spirit of what I am currently trying. Either way hope Hype gains even more traction in 2020 … looking forward to the book!

Here’s a screenshot from the Photics.com website (WordPress) dashboard. It shows the recently published templates and the templates that are upcoming… 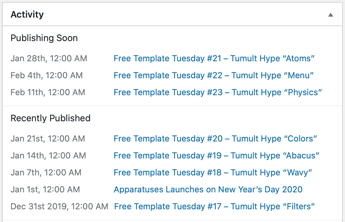 UPDATE: I’ve been busy. There are so many new templates queued up that the “Recently Published” section in WordPress can’t display them all. 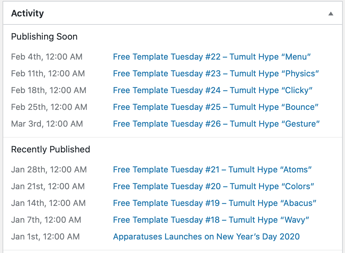 The “Lightbox” template is scheduled for March 10. (I have some more writing to do, but it’s basically done.)

I’m feeling pretty good about this project and A Book About Hype (printed edition). I realized it while working on the “Bounce” template. This is it for Flash. This is the year that so many classic web games will die.

It’s terrible. But maybe with Hype 4, the games can be reborn.

Update (2/6/2020) — Templates are scheduled to appear every Tuesday, from now until the end of March. After the “Lightbox” template are the “Sliding”, “Picturing”, and “Timing” templates.

More templates are planned for after that too!

Wow, some people really wanted this one… 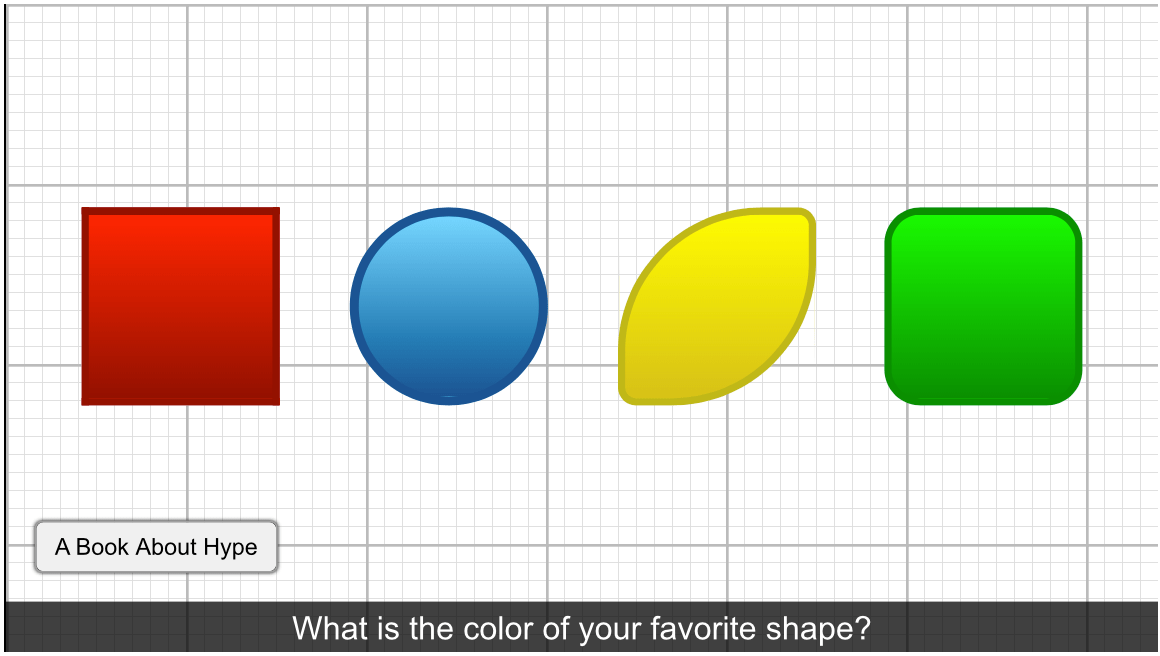 The “Clicky” template is about using the parameters in Hype’s built-in JavaScript functions. Doing so can make your project more dynamic. In the “Clicky” example, there’s only one JavaScript function — not four separate functions or four separate timelines. That’s because it uses the “element” from the action event. If an element is clicked, modify that element and only that element.

More information is in A Book About Hype. The book is ahead of schedule, but still several months out. If you want to be notified when the book is available, heart the second thread in the announcement post

It’s been a long and slow death. Even this video is almost 5 years old…

And yet, what’s been done about it?
For many old Flash games, like “Population Tire”, pretty much nothing.

…but if only people knew… if only they knew how to make games with Hype… perhaps fun would return to the Internet. This week’s free Hype Template shows the possibilities… 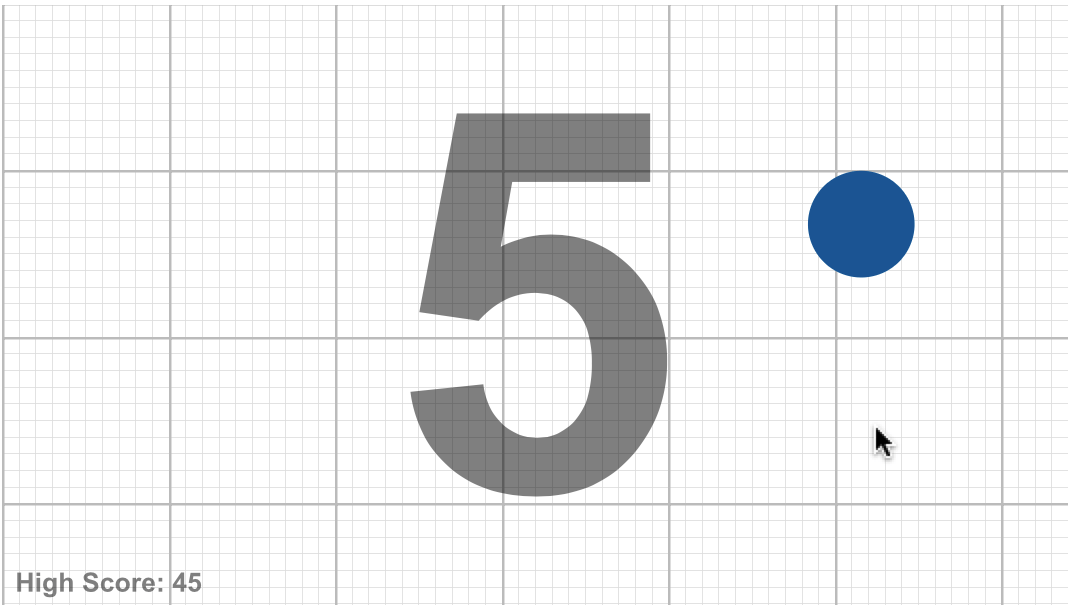 Making games with Hype is to be a big part of A Book About Hype. The “Bounce” template doesn’t even use the new Physics API. I’m really looking forward to releasing the book, but there’s still much more work to do. 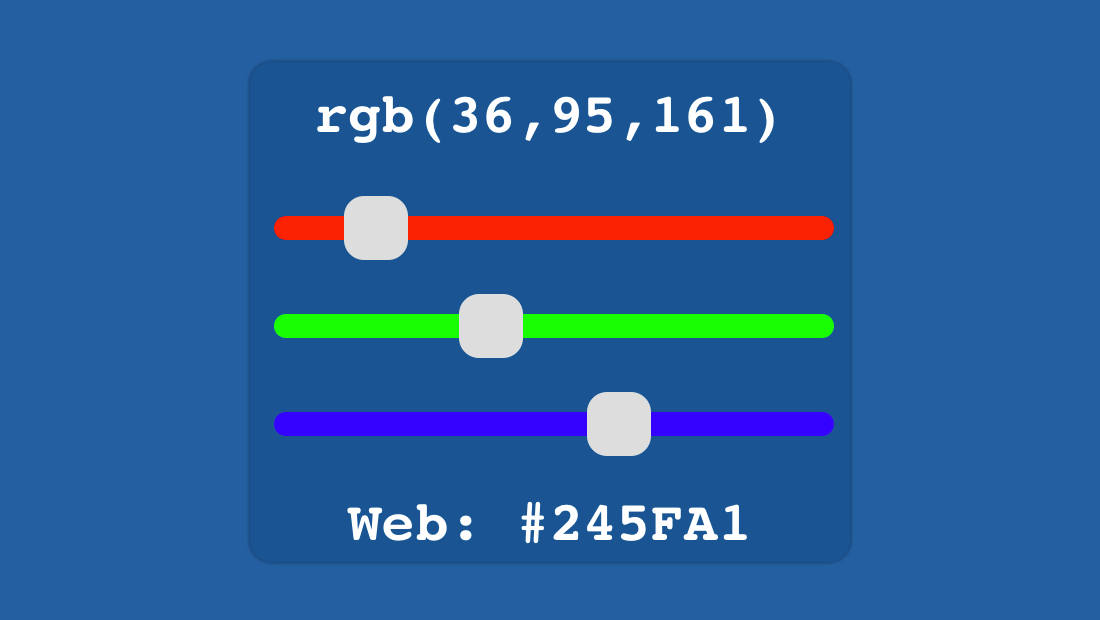 The lightbox template is now online…

The modern Internet uses 16-BIT color. With 256 possibilities for each of the three primary colors — red, green, and...

The slide puzzle is now online…

Back in the glory days of the arcades, when Mortal Kombat and Street Fighter 2 were new, successfully landing a... 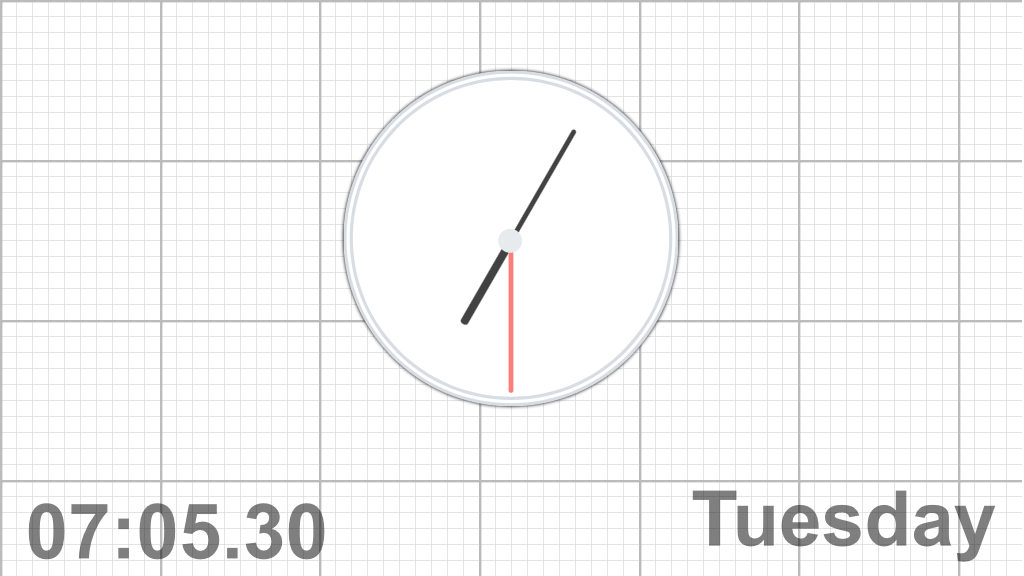 The “Timing” template is now online…