Here is the first clip of my latest Hype experiment.
If you have worked as an illustrator/ painter you have seen those desktop wooden figures that give you a quick pose so you can sketch the body.

I wanted to Hype this so I am starting this as an experiment.
Controls are still too loose but as with all these projects trial and error.

Cool! How much is symbols/relative timelines vs. javascript?

All Timelines and groups and symbols at the moment.
I like to see how much I can push Hype right out of the download.

All move together when a waist action is called.
Yet each element when tapped and dragged needs to move independently as well.

Once the front is done I have the sides and the 3/4 views.
This is a challenging fun project though.
I’ll share as I finish the parts.

One of these days Hype might incorporate kinematics - the ability to attach points on objects together - but I would imagine that there are far too many things higher on the list.

Here you can play around with the model.
I think it is still too loose and the groups in the layer order can inhibit your ability to grab the parts right away.
Ideas? thoughts as always appreciated. 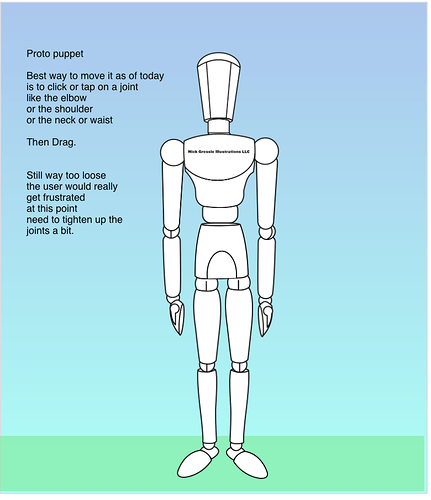 Would love that
Have you seen kestrel moons Creature creator?

One of these days Hype might incorporate kinematics - the ability to attach points on objects together - but I would imagine that there are far too many things higher on the list.

This is generally true, but the part of me that wants to ignore priorities would love to work on a kinematics system

The developer’s hell - do what’s necessary or do what’s fun.

My approach at work is to devote a bit of time throughout each week to something that is fun – something that’s not immediately useful, but which can come in very handy somewhere down the road.

I tend to deal with a ton of high-pressure stuff all day long and some of it is detailed, fiddly and in which it is easy to miss something (such as revving multiple iterations of complex Hype projects). When it gets to be too intense, I do something fun instead - such as a Hype project that some something simple but very cool (such as the interlooping swirls I posted a few months back).

Many times over the past few years I’ve been able to pull one of these out of my hat, pop in into place and suddenly I’m a miracle-worker. (Wow! You did that in only three minutes?!!!) Of course, it took weeks or months of five minutes spent here and there, but the miracle worker thing is definitely good for the rep.

If it is low priority but fun, set aside a half hour a week for it. When it is finally ready and introduced out of the blue, people will be very impressed.

I’m impressed! For a project like this I would (and do) use a program like Moho which is specially designed to do this, with bones etc, but as an experiment I like it very, very much. I’ve dowloaded the file and learn a lot by analyzing it. Thank you and succes with the further development!

Thanks!
I am adding drop down menus and controls etc so far a lot of fun.
This is primarily a “how far can I push my favorite software app this week?” project