Now that I feel a bit more comfortable working in Tumult Hype, I would like to take tutorial suggestions.

I would like to format these tutorials as learning projects (hype documents).

Please make suggestions below. If I see a tutorial I would like to work on, I will like it.

If there is a specific format you think would work best, please describe.

Much more on responsive. Step by step, explaining the theory, what to do and not do, explaining the theory and reasoning behind each feature. There are so many relationships in the settings, its difficult to get the picture sometimes. I have a good 100 hours in working with responsive and still come up with problems every day that I thought I knew the answer to, but find I really don;t. I have resorted to a lot of ABA testing, trying to document the effects of every single change, and even then I get surprised several times a day because there are often several factors (settings) that seemingly operate against each other. Sometimes it feels like I am working against the Law of Unintended Consequences.

With all due respect to the absolutely superior developers of Hype, they are not teachers, in the same way that engineers usually are not good teachers because they see their creation from a different viewpoint than a student does and there is no way to avoid that unless you are that 1 in 100,000 who is both a teacher and an engineer.

It comes with the territory. Learning Hype and all it can do is like going from a 46 horsepower Piper Cub aircraft to an F16 fighter or a 747. When you get there, its worth it, but along the way, you think you are going to die once in a while.

Personally you couldn’t get me to write a tutorial, I think my head would explode, so more power to you.

more explanation: I have build custom cars and race cars, and when someone asked me how I built something, it is almost impossible to explain unless you want me to talk for 24 hours, and by that time, the other person is either asleep or gone. :"-)

as being total unstructured i would like to see a collection of hypespecific javascriptfunctions that cover some use cases which are not directly accesable by the hype API. preferred: without additional js-libray.

so i’m not looking for a tutorial … may be sthg. powered by github ¿ and who would be so kind¿!

use cases which are not directly accesable

As some on else suggested in response to my Exhibeo problem which turned into a discussion of Symbols, a Symbols tutorial would be great!

And what type of format would you recommend? A click through, or just a demo with notes?

Tell me more specifically what you mean by click through.
Demo with notes sounds good.
In general, examples of how to use them, etc. I am not really understanding the real benefit of them.

I have decided to work on a tutorial for Symbols.
The finished tutorial will look a lot nicer, but I am working on the format. I could also separate topics into scenes. 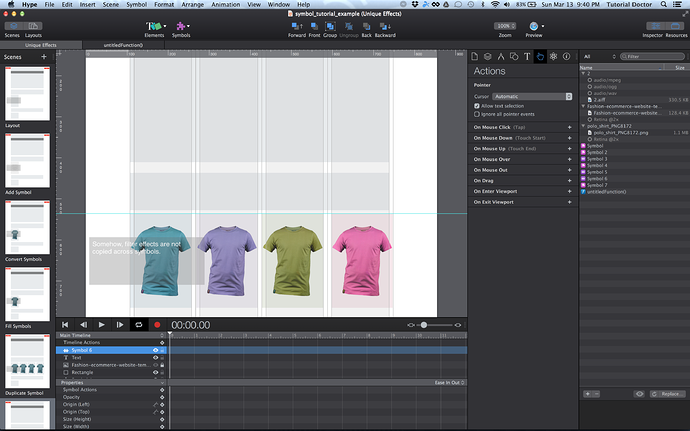 I have decided to work on a tutorial for Symbols.

Thanks @TutorialDoctor, perhaps a practical example may help to understand

@TutorialDoctor
Look forward to your tutorial… Thank You for your efforts.

It is still a WIP, but I have a nice format for the Symbols Tutorial. I am hosting it on Github already.

Sorry for the delay on the Symbols Tutorial. I have been rather busy. I will work on finishing it over the weekend.

I’ve just been too busy to work on any tutorials! I have watched several tutorials on Sketch symbols since.

One thing I would I would like in Hype is the ability to override parts of a a symbol.