I’d love it if in the spritesheet editor we can resize or batch process image sizes of all the sequenced images? I currently have to use a batch processing image app. (For whatever reason photoshop doesn’t batch pngs?)
As an option: Preview the spritesheet within the editor based on what frame rate its set to before hitting the button to create it in the timeline. As of now, it’s a guessing game and going back and forth is a pain if you don’t see the animation being what it is, since modifying in the timeline is not an option after its been added to the timeline?

The app I use and that is perfect for the job: 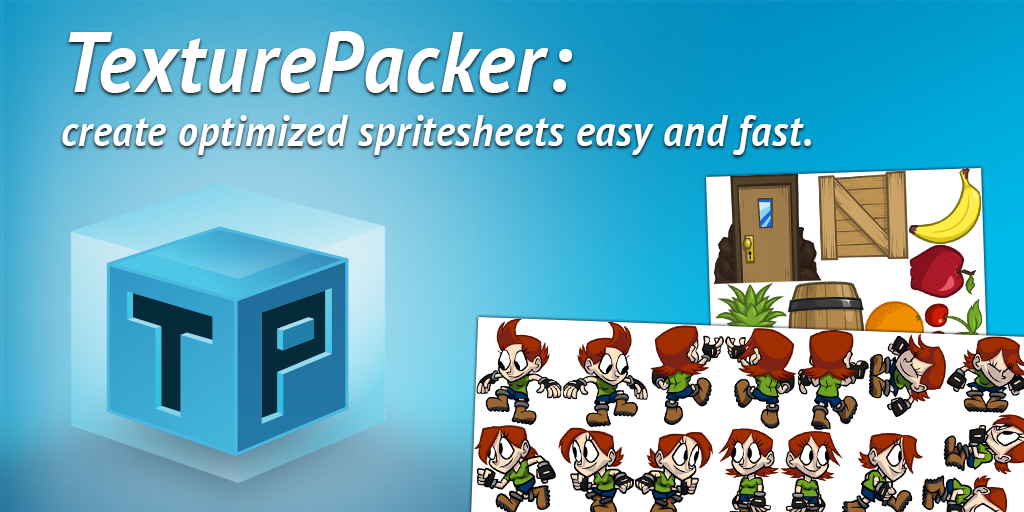 Texture packer looks promising but I don’t need anything else other than batch image resizing.
I wish imageoptim had it built in would’ve be rad even better hype in its sprite editor, why should the process be scattered, ever think to yourself? On the flip side, I cant have it all, can I now?

“Automator” will do this… did a quick “Workflow” trial:

I tried that, Automator failed to do it for me

it was based on folder trigger. I’d like to see your recipe in automator please. thank you! Send me the file if you don’t mind.

What I wrote in my post above was the recipe.

I used the “Workflow” type with the selected steps mentioned.

So I selected all the items in a folder then ran the workflow. They were copied to a designated location (in my example the Desktop); then the resizing took place.

I have not tried a folder action.

Great! I’ll give it a shot. Thanks Jim.

I just created a “Folder Action”

I wanted the images to be added to a different folder called smaller?

This is a puzzle - my set up looks just like yours…

But I had to create it twice. Before I did the second attempt I went into the Mac’s user “Library” > “Workflows” folder > “Applications” folder > “Folder Actions” folder and got rid of my first attempt. The second version worked.

The attached workflow ~ “Folder action” assumes there are two folders on the Desktop:
One named “Original Files” the other named “Scaled Files”.

Here is the workflow that You can put into the “Folder Actions” folder that I described above:
OriginalToScaled.workflow.zip (44.6 KB) and see if this works for You. 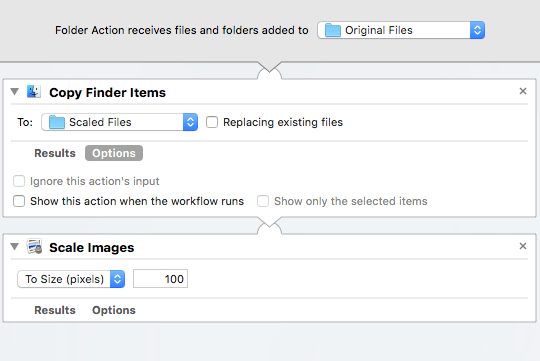 I wasn’t following this thread too closely, but I noticed it moved into the automation/scripting realm. So, why not use SIPS…

why not use SIPS

Ah SIPS not used that for years.

Even way back when , must people I knew did not know about SIPS apart from those that found it on the likes of MacosxHints… (before Mac World took it (MacosxHints) over and then retired it long may it RIP)

So I thinking the real questions is why use SIPS if you can GUI in Automator… and not code it.

I wanted the images to be added to a different folder called smaller?

To be honest Apples implementations with Folder triggers and Automator have always left a lot to be desired. Thats polity saying The are bloody unreliable and always have been from day one.

My suggestion is do not use them. Use some thing like
• Hazel which works. (paid app).
• learn to write LaunchAgents or use Lingon which will help you write your own watch process LaunchAgents ( not sure v7 is worth it!)

Only where folder actions are concerned. See my latest…

I wasn’t following this thread too closely, but I noticed it moved into the automation/scripting realm. So, why not use SIPS…

Im use to something like Automator something that has a UI. I tried using keyboard maestro without luck maybe because I was creating based on what I understood as a coherent set of rules maybe there’s a step or rule I missed. I’m going ask on the KM forums. That said, I heard of hazel, is it for folder triggers? I have keyboard maestro for other things it works really well.

But I had to create it twice. Before I did the second attempt I went into the Mac’s user “Library” > “Workflows” folder > “Applications” folder > “Folder Actions” folder and got rid of my first attempt. The second version worked

Ever cared to see what was going on in the folder actions app? Search finder for “folder actions“ I don’t know if you know, you can edit a folder action from within that app and sometimes it gives you an indication that something is off when the title of the action is in red?

I heard of hazel, is it for folder triggers?

Yes, I use at home and at work in many workflows.
You can have conditionals on you triggers, run scripts , AppleScript,unix, Automator workflows…

Look at the link I listed

We’ll see maybe I can automate it and use that terminal command with Automator. I’m wondering how it would look like?

Personally, I’d probably just make an AppleScript out of it. I had trouble passing values to the Terminal using Automator. But with the Script Editor app, and JXA, it was fairly easy.