Scrollbars not visible in Safari

I’ve created a symbol and set the width to 100% and the overflow to Auto Scrollbars
When I preview the file in FF, Chrome and Opera the scrollbars appear when the stage width is less than the symbol, as expected.
However Safari doesn’t show the scrollbars, they are there and can be scrolled but are invisible.
Can anyone tell me how to make the scrollbars visible in Safari please?

PS: You may have to increase the size of the symbol to accommodate the scrollbars if they are on the rectangle

I believe Safari also looks at whether you have this option checked in your system preferences: 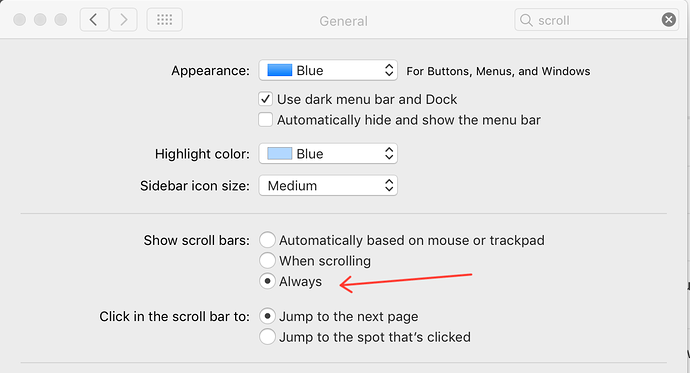 The default is ‘Automatically’ which is probably hiding it.

Thank you both for your input.
I’m testing Hype on a commercial basis, we produce infographics and need a solid replacement to Edge Animate.
The default scrollbar settings in Safari could well be the problem so hopefully there’s an alternative solution to placing symbols and images into elements or other symbols and having Safari display the scrollbars accordingly.

Which worked well across all browsers, including Safari, for a single image.
Our infographics get translated into 5+ languages, the text is imported from xml or json into various symbols in the scene. My problem is finding a consistent solution to making scrollbars visible in Safari.
I am extremely impressed with Hype so far and apart from this dilemma and needing to find a solution to dynamically adding multiple duplicates of a symbol from the resource library into an element in the
scene Hype looks very promising.

Here’s a link to our first responsive infographic produced with Hype, its basic but you have to start somewhere

January 9, 2017 -- On January 9, 2007, Apple CEO and founder Steve Jobs unveiled the iPhone at the MacWorld Conference in San Francisco. It has subsequently sold over one billion units.

@embussy, I don’t have a solution to your scroll bar issue, but I like your infographic a lot! Very impressive work, especially considering the dynamic nature of the content!

I haven’t tried this code, but the ‘view demo’ on this page does show there’s a way to potentially add CSS to always show a custom scrollbar: You can customize scrollbars in WebKit browsers. Here's the CSS you need to know about to get it done, with examples.

and needing to find a solution to dynamically adding multiple duplicates of a symbol from the resource library into an element in the scene Hype looks very promising.

I’m not sure I followed; can you elaborate on what you’re trying to do?