Here are two versions of an interactive product demo of a hardwood shutter. The “Rotating Shutters Animation” has a high frame rate for greater precision. With this one, you can open and close the louvers automatically by clicking in the center or manually by dragging the edge-mounted tilt rods.

The second file, “RotatingShutterPanelTEST” was a low frame rate test. Rather than rotating the louvers, this rotates the panel with the louvers in five preset angles. Drag the ring to rotate (the circular arrow is not intuitive - if this were to be redone, this would be better labeled). It is huge - around 4.5 MB, so I would not use it unless it were below the fold and with something distracting above the fold to allow for loading time. 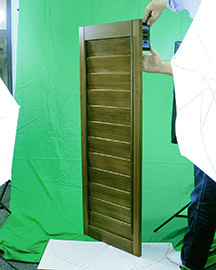 The higher frame rate version was done with green screen, using a bubble level app on the iPhone to keep it on axis. (See photo.) The one I am posting only opens and closes the louvers. I did shoot the whole package, though, including full Y rotation.

For the rotation, it was important to make sure that the rotation was consistent between frames (5º rotations in this case), so I created a protractor in Illustrator, tiled and printed it, then spray-glued it to some corrugate with a hole at the center. The panel has a hole at the top and bottom edge, which is used in manufacturing for suspending the panel when a finish is being applied. I placed a dowel in the bottom hole of the panel and plugged it into the hole in the protractor. (If I’d had access to the spray booth I would have set it up in the booth using the painting brackets, which would have been better than having to level every still.)

I would not recommend having so many photos in a Hype animation as it slows down the loading, but I’m not up enough to create JS controls for a video. I did minimize the size by using TinyPNG (free conversion online or as a paid PS plug-in). Also, once the masking was done, I determined the minimum width for the widest panel angle and trimmed all the frames to the same size. I could have saved more by trimming to a minimum space on every frame, but because of the way that perspective works, this would have caused shifts in the center points and I didn’t want to mess with horizontal alignment.

One thing I would love to do would be to create a grid of hot spots that would allow the user to drag up and down and in any direction so that they could open and close the louvers at the same time they are rotating the panel, but the load time would be impractical (12 louver X angles times 30 panel Y angles = 360 photos).

Thank You for the thorough description of your technique.

That is very cool! It is neat to know about how you did the live video shoot; pretty cool to control “real” objects from an animation. A little bit Mortal Kombat-esque

I would not recommend having so many photos in a Hype animation as it slows down the loading, but I’m not up enough to create JS controls for a video.

If you had the possibility of using a video and thus no alpha, I would recommend using JPEG instead. The images compress pretty well (~8 KB instead of ~25 KB), and you could even combine into a single spritesheet for all the images that would be about 300 KB at a reasonable quality setting. The single file load would then improve performance since there are far fewer connections to the server. You also could turn off preload, as it become all-or-nothing and then you don’t need to wait for other scene’s shutter images to load before displaying anything. The single spritesheet approach would be to put it in a group with overflow:hidden and then adjust the position of the image to change instantly. I also recommend turning of ‘Use WebKit graphics acceleration’ when dealing with large images (yours would be 120x10,800).

The transparency is definitely an issue. Using JPGs on a solid white backgroundwould have dropped the weight of the bitmaps from 778K to 451K. There are always compromises. When a landscape image is on a white background on a page, the white area can be reduced vertically so that is is not overwhelming, but a vertical image requires more vertical space. Workarounds include putting the image in a box, which impacts the overall visual design.