I want to make some nice animation banners/ slideshows to use on my wordpress website.

I testing for the moment LayerSlider to do this, but now i’ve discovered Hype and i was wondering if i can do exactly the same as with LayerSlider.

At the url below you can see this test slider

Now i’m trying to create the same effect with the clouds @ Hype, but after a couple of hours it doesn’t do what it does at LayerSlider.
It works with one fixed background and 3 cloud “waves”.

Anyone who can help me to get this done please

It always helps if you could show us what you’ve done by uploading/adding your Hype project so we here can see what might be the problem.

Having said that I don’t see why a project like this should not be possible with Hype.

If you have seen my test with layerSlider, you see that the clouds are moving.
And there’s some deepness in the clouds.

I’ve streched the clouds to create the moving effect which was not necessary @ LayerSlider
Can i do this in another way??? 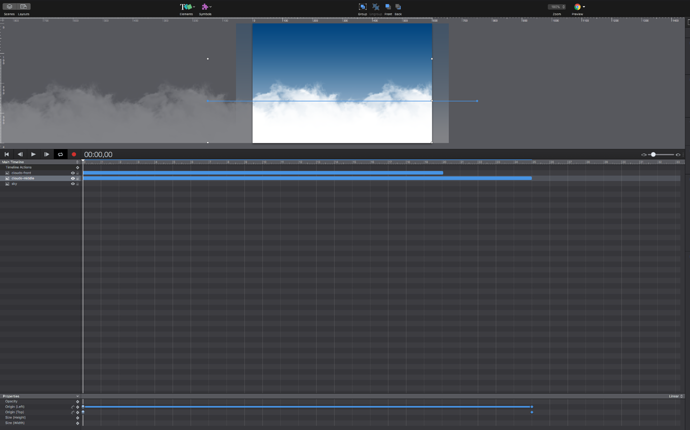 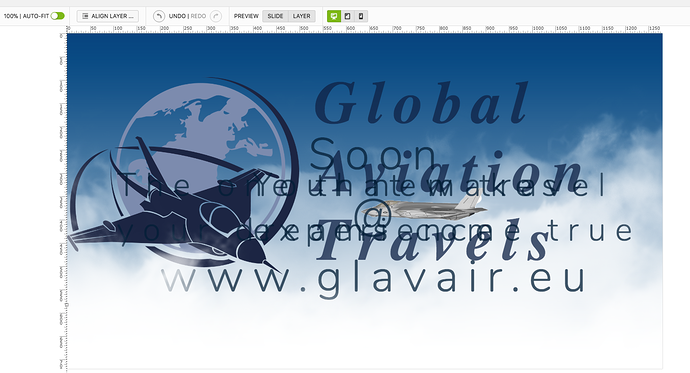 I have only the weekends to work with this free trial, so i need a quick answer/solution with this matter please!!!

I recommend checking out how the animation system works. Animating an image moving from left to right is pretty quick to do in Hype, but you’re going to need to know how to work with the Hype interface, which is very different than Layer Slider. Please read: https://tumult.com/hype/documentation/3.0/#animations

If you want to loop a timeline, a ‘Timeline Action’ is a great way to do this: https://tumult.com/hype/documentation/3.0/#timeline-actions

Please give it a shot and if you have any issues please share your Tumult Hype document. You can make a zip file of it and drag it into your reply.

I’ve managed to get my clouds moving.

It asks more work then with LayerSlider, maybe this can be adjusted in a future update

Now i have to copy every cloud that i used and make 2 movements to get it nicely moving without any stops in it
I use 3 clouds (front, middle and back)
Every cloud is put in another timeline to get them move different from each other.
With the front and middle i have no troubles, but with the back cloud there’s an issue at the end of the timeline and it’s made just like the front and middle cloud.

Next issue is my aircraft
In the first run it disappear in the middle of the screen, but then it starts over again and does the whole “run”.
It happens in different browsers

Hi Michael – No need to make new posts since this is the same topic.

It would be helpful if you shared your Tumult Hype document.

When you work in Hype you are making a Hype document, so when you select File > Save, a .hype file is created. If you select that file and ctrl + click on it, you can make a compressed file out of it. You can then drag that file here if you’d like us to check it out.

It looks like you may need to separate your Plane Flying timeline from your Clouds timeline so that timeline actions from what is looping clouds doesn’t cancel the plane.

Sorry, i’m already on the road till Friday or Saturday, so i will post it then

Is this the document that you’ve asked for???

I hope you can find a solution very soon, because for the moment i’m not very convinced to buy your program
I have still tomorrow left to make it work, then off again for a week and my trial period is over

so i need a quick answer/solution with this matter

If you can only manage weekends to come on the forum and ask for solutions don’t expect a “quick answer” as we are a community that helps out users not a “help desk” that solves user cases.

It asks more work then with LayerSlider, maybe this can be adjusted in a future update

Maybe LayerSlider is the right tool for you? If it was me, I wouldn’t be demanding that a particular piece of software be updated until I actually know that the software that has been mentioned can not do what it is that i ask. Especially as “I’m trying out” the software.

Is this the document that you’ve asked for???

Yes, normally when a “user” has a problem we ask for the document so that we can look at what’s been done and suggest accordingly.

off again for a week and my trial period is over

There are cases when trials could be extended. But that is at the discretion of Tumult. I can see that @JimScott is replying so we’ll see what he can do

Here is your revised Hype project which I now call: GlobalAviation_JHSv1.hype.zip (1.7 MB)

There were numerous errors in setting keyframes and a “Timeline Action” issue. I won’t be fully writing them out but please see “Notes” below. In general You were working against yourself with different settings being in conflict such as keyframes for the same property being stacked on each other.

The main point with the attached Demo is to show You the animation can work - so I stripped things out that I thought were problems and re-animated the plane & clouds. Some of my settings may not be your final intention - but again the plane and clouds do work, so You have a place to begin making adjustments.

Notes:
I did not see the value of having (2) sets of clouds so, for the “Back” clouds only, I used just one and re-synced the animation. I did not change the others in case there was some purpose I could not discern for the duplicates. Easy enough to re-create the second copy of “Back Clouds”.

There were conflicting key frames with the original “Back” clouds that were not present in the “Middle Clouds”.

Also - I changed all relative timelines to “standard” ones. There wasn’t necessarily a problem per se but I wanted to eliminate as many variables as possible in working on your project.

And here was your “plane issue” - I removed this Timeline action…

Thanks for the help.

Off course, if you do use the program day in day out, you can do very nice things with it, like every program.
And i’ve you designed the program, nothing has secrets for you

But since it has only a 14 days trial and i can use only 4 of them, it’s not much to learn everything the program can do, that’s my problem with most trial software, but that’s already solved.

But i’ve managed to get it to work

Hmmm, somehow he wont upload the mp4 file
So here’s the complete file

Here’s an updated version of

Glad You got things working!

And I think the newest version looks the best.

Assuming You do elect to go with Hype may I recommend a book by one of the Leaders on this Forum - @Photics: https://photics.com/books/a-book-about-hype/. It took me just two days of thorough reading to get a great overview of the Hype app, which made for better use of this Forum as I moved beyond the basic questions one typically has with a new program… and also made the online Documentation more effective as I wasn’t trying to piece things together - just drilling things down to specific detailed questions.

This book covers v3 - and while version 4 of Hype is due out soon - the general principles of Hype would still be applicable, getting You up to speed quickly - and a stepping stone to learning about version 4’s new features.