The first part of acceptance is admitting there is a problem.

Seriously though @Jonathan how hard would this realistically take to implement? Is this a feature that would be difficult to add?

Thanks again for paying attention to my little issue and admitting it needs to be tackled in the app.

Aside from never being able to accurately answer that until the feature is complete, and our general policy of not making promises about upcoming features/releases: I think the reason we didn't do this originally was more from a UI side (action menu complexity) than it being a difficult task. It is on the radar

Didn't forget You - I had a job that was something of a Sisyphean task - but that's done and now on to your request to start/stop multiple audio tracks along a timeline.

In the Scene we see several elements (Please see Fig.1 Below for reference):

At 3 seconds into the "Main Timeline" the "playSnd1" function is triggered via a timeline action which plays audio track 1 ("dig-wind1.mp3" - wind sound effect).

When the "Play" button is clicked all the soundtracks that were placed into the array will start playing from the exact place in each soundtrack as when the "Pause" button was clicked. In this Demo there will be at most two soundtracks triggered. The third soundtrack not used directly but is a "control group" (more on this under "Details" below "Fig.1" 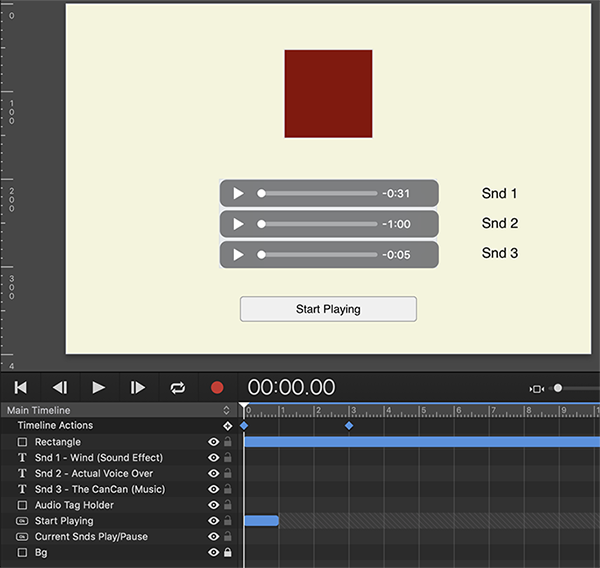 Inside the rect "Audio Tag Holder" is where, as previously mentioned, the audio tags reside (Please see Fig.2). This is where You can remove the "controls" for an audio track. You will also note each audio tag has the class "voiceOver". This can be changed as desired - but it will need to match the class specified in the function "playPauseAudio" which does most of the work in this Demo (more on this in a bit).

This function does most of the work in this Demo (Please see Fig.3). As You seem unfamiliar with JavaScript I will not write up details here with one important exception (and the reason why I am showing it at all):

In line 5 is where we select all (querySelectorAll) of the audio tags with our desired class ".voiceOver" - note the "dot" in front of ".voiceOver" which is how we indicate class in this JavaScript notation (the audio tag's class notation does not have a dot): 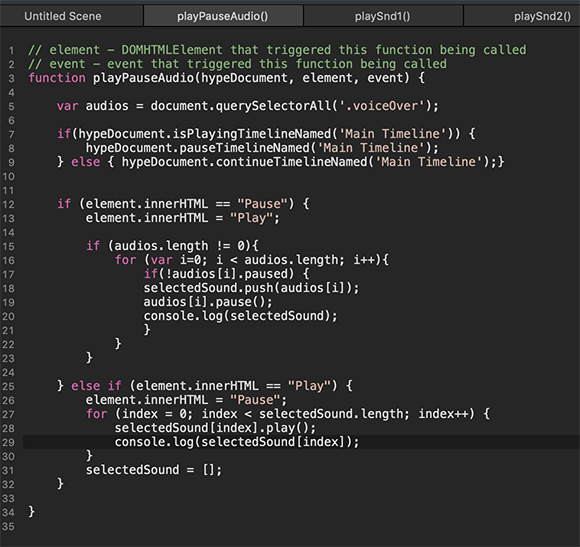 You can change this class to another name, just make sure the class in the audio tag agrees with the class in line 5 of this function. There are rules for naming of classes read more about them here.

OR if You wanted to select ALL the audio tags regardless of class You could just use the following in line five of the code:

Note that we are referencing the audio tag here only - no "dot" used (which indicates class).

You do not need to manipulate any other part of this code for things to work as presented in this Demo.

Jim, I can't thank you enough, it works wonderfully!

The only issue I have at this point is that I need to be able to clear the array so that I can continue to use the same JS calls for every slide. So for instance, I have a timeline action to trigger my audio playback, so I'm using the audio id of "slide(xx)". In my first slide that equates to slide01 - slide07.

I named them generically enough that I could reuse those same ids for each slide, and I'm hopefully not needing to make unique audio id's for every single instance throughout the presentation. Is there a way to 'flush out' the array after moving to another scene?

Regardless, it's a solution that works, so thank you!

Glad You have found the Demo to be of use!

I will be checking in with You here tomorrow afternoon (Monday, 22nd - PST). Briefly - there is already a flush mechanism for the array in place. I will go over the ID scenario with You at that time as well.

So let us note here that IDs are unique for a given element on a page. Hype Scenes (in a single Project) are really all on one page. So IDs will have to be unique for every Scene in your project - ditto for individual Layouts which will need unique IDs as well.

Why don't You post here on the Forum a simple sample project with say two Scenes, each with maybe 3 slides and a couple of audios for each slide in the Scene, that is representative of your over all design. This way I can better understand your set-up.

If I can see an example we might be able to come up with an efficient solution. Without a Demo of yours to reference I will be guessing - instead of understanding - your needs (though I have a reasonably good idea).

The Forum has a 3MB upload limit, but a simple Demo should come in under that (small images & short audio tracks). If your images are of a confidential nature You can PM me - or use images/audio tracks that do not have this restriction.

Ah very good, thanks for clarifying those points. I was afraid that would be the case, it's good to know my assumptions were correct on this.

I'd be happy to throw something together when I have a moment to spare, right now we're trying to wrap up a few things so that has most of my attention, but if you think there might be a more optimal way to accomplish what I'm trying to do I'm all for it.

Thanks again for all your help Jim, I'll be sure to hit up this thread again soon!