Pause and load, other effects achievable?

How can I achieve the effect like on this site :

Felix & Paul Studios is dedicated to storytelling through the medium of cinematic virtual reality. The studio combines technological innovation with a unique, pioneering and in-depth approach to the new art of virtual reality storytelling - creating...

I’ve seen the sample on “Survey Legend” but struggling on this part.

Can you show us what you’ve done so far?

The idea is to have a timeline playing your animations:

Then all you need is the Javascript function to run on scene load that plays the timeline forwards or in reverse depending on the scroll direction.

If you have a go at it and then bring what you have here then we can help more.

You might be lucky and get someone to do it for you but if you show an attempt you might find that more people will jump in.

Here is a link to a Hype template (by @michelangelo) that offers some of the features You are looking for (just swap out images for text blocks) - at the minimum it will be an instructional example:

Thanks for the replies.

I’ve only gotten some text changed from the Survey Legend sample and added an overlay on button press (however it does not close and back to where I left off).

Tried to create a new document (suggested by DBear) for scrolling, but it just doesnt work! URGGH… Total newbie, hope some kind soul can point me on the mistakes I made.

I’m re-creating (have to be hardworking).

I’m trying to re-create from this site (http://www.werkstatt.fr/) which I think is easier, but it is NOT!!

Somebody pls help me, thanks in advance~~

Thank You for having examples and descriptions of what You are looking to achieve.

One reason You may not have gotten more replies to your questions might be to answer all of them would take some time - and then of course your additional follow up questions to proposed solutions to the problems.

So why don’t we take things in smaller bites and maybe others will be more likely to take on a question also.


When You say “disappear” I am assuming You want the animation to fade out quickly, but not instantly. You will be able to adjust this fade out time to your own needs in the JavaScript code in the Demo project.

The animation consists of two rectangles moving up and down repeatedly. The two rectangles are in a Group called “Animation Group”. This Group has an ID of “animationGroup”. (You assign the ID name in the “Identity” Panel, using the field: “Unique Element ID”).

In the Hype “Actions” panel: “On Mouse Over” & “On Mouse Out” are assigned to the “Text” box (element). These event handlers call the JavaScript function “animationDisappearToggle()”.

If you wanted it to fade out to “0” opacity over 2.5 seconds instead, the code would look like:
hypeDocument.setElementProperty(animGrp, 'opacity', 0, 2.5, 'easeinout')

it is faded in to 100% over 1 second and the animation resumes.
hypeDocument.setElementProperty(animGrp, 'opacity', 1.0, 1.0, 'easeinout');

The singular JavaScript function that does all the work:

So picking up where we left off…

The above example used only JavaScript. The example here in this post uses only Timelines to achieve the same effect. It is very simple to create, but you need to pay attention to the various settings for the Timelines in the “Actions” Panel and in the “key frames” in the Timelines themselves (please see screen capture examples below).

In this example we have two Timelines: the default “Main Timeline” plus one called “Animation Fade In-Out”.

The overall effect is the same as for the JavaScript example: the animation goes up & down and fades~in out depending on the mouse event. The “Main Timeline” is paused “On Mouse Over” and resumes “On Mouse Out”.

I’ve created these two versions to show that You can create the same effect using different tools~approaches. Which one to use will depend on what your overall goals are in your presentation - and of course You can use JavaScript code You write in conjunction with Timelines. 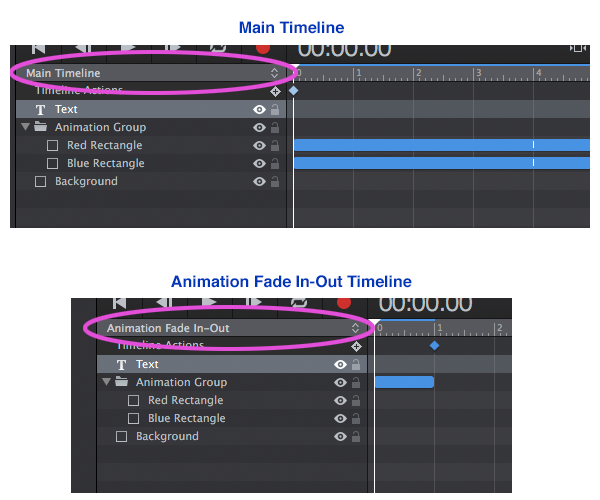 On to another request:

This project uses the Timeline only to create the effect.

The key here is to create a group, with the content You wish to zoom inside the group; then set the group’s “Content Overflow” to Hidden in the “Metrics” panel - as per the screen capture below. This set-up is your basic mask.

I used the “Scale” property to increase~decrease the image size. Please also note I move the top of the image down while the image is scaling to keep the head full in view at the end of the scaling. 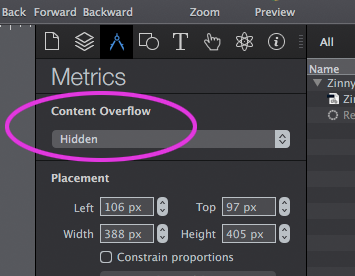 Here is one possible solution to another one of your requests:


This is mainly a JavaScript solution with the JavaScript calls being made by the “On Scene Load” & “On Scene Unload” event handlers in Scene 1. (There are two scenes total in the Demo.)


So, say we click to go to Scene 2, and when we leave Scene 1 the timeline is at “00:03:15” and the direction is “reverse”. These values will be recorded in to the global variables as described just above. When we click in Scene 2 to return to Scene 1 the values stored in the variables will be used to set the time & direction of the timeline to what they were when we last left Scene 1. 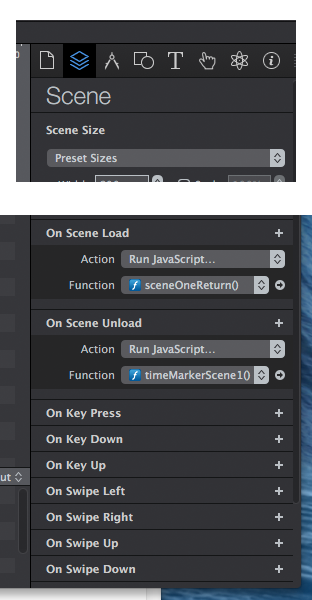 Thanks for the reply.

I will look into it closely, it’s a bit to digest.

I’ve gone back to the first example (since my client prefer that one) and adding in the “return to previous scene timeline position” example. It somehow gone haywire.

sry, but this document is a mess. should should go step by step and follow @JimScott 's hints …