I upgraded last week to 3.5 and have begun to notice some odd behavior.

When typing in “Head HTML” at times the text jumps down a line (taking out the line number) and then I can’t delete the extra spaces. When I try, the cursor remains on the lower line, but begins taking out chars in the line above and pulling earlier characters down into the lower line. Quitting Hype and reopening it did not change the behavior. Other text programs on my system are behaving normally.

For now, resorting to using Sublime and then pasting over the existing text in Hype as the more I try to do within Hype, the less usable the code I had in there becomes.

It starts writing vertically down the side of the window, also. This from within a comment block. 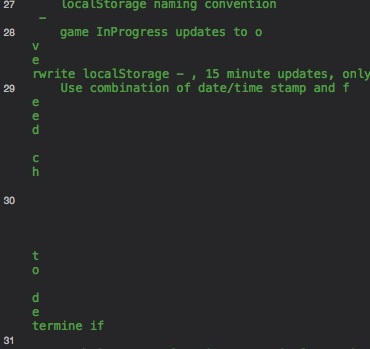 Sorry you’re hitting this issue. Are you able to share with us the JavaScript code you’re using? (Feel free to PM if you’d prefer to not to share).

We’ve seen this issue before but we’re not yet sure how to reproduce. If possible, could you also please submit an issue from within Hype, using Help > Report an Issue? When you do so, please also include your document in the Issue Reporter’s Attachments section, and ensure that the “Send logs, preferences, and system information” checkbox is checked.

Thanks, Daniel. I didn’t realize there was that submit feature (newbie to Hype), and I have sent what I had to you. Unfortunately, I’d already changed it by pasting in things from Sublime over the area that was giving me problems.

That seemed to stop the odd behavior, though. I have not been able to duplicate the error, but one factor may be that I had a very large comment block that I deleted in that paste. Very little else changed at that time.

Happy that I’ve got a workaround for the only issue that I have found. Loving the new version!

I am CONSISTENTLY hitting this bug and have attached a Hype file that is giving me a problem…for your review. If you open the document and see line 75 of the Head HTML, you’ll see what we are running into. Text edits result in the creation of “unnumbered” lines. I was trying to add a space at line 76 to line up my code better and it pulled text from line 75 down to an unnumbered line. Hoping you can recreate.UB-Sports-testing only.hype.zip (323.8 KB)

One note…if I duplicate this file within Hype, these extra lines go away.

Thanks for the reproducible case – and sorry you’re hitting this!

For now, we recommend editing large HEAD html text outside of Hype to avoid this problem.

I plan to look at this for 3.5.1, but my initial investigation shows it is a bit of a tricky one so it is unclear what might be required for a fix.

Out of curiosity, if anyone hits this please let me know what version of OS X you’re on (I suspect there might be some combo of OS changes that cause it for Hype 3.5 – we really didn’t change anything with text editing so it is odd that it has come up now).