Hi. Exported OAM files that I use with the Wordpress plugin are much larger than both the project and if exported as standard HTML. Why is this? Is that a bug?

You, can always just rename the .OAM to .ZIP and unzip it. Then you know.

Thanks. Didn’t know about the zip trick. I unzipped it and it has a 12MB png in there called Default.png … Is that needed?

It is not used by Wordpress so it can safely be deleted (other apps that use the OAM format do use it).

Thanks. So it won’t affect the loading speed of that element on a Wordpress post? And I can remove default.png and re-zip and rename as .oam?

The Default.png is not downloaded when viewing the element in Wordpress.

And I can remove default.png and re-zip and rename as .oam?

Hi. I’m using Hype3 and have been having the same problem as Nigel, with oam files being bigger than the Hype doc they’re made from, so after reading this thread I did a bit of poking around in my files and found something puzzling.

Up until Feb 2020 oam files always came out smaller than the Hype doc. In April I noticed that they’d started to be significantly bigger.

So I did some tests and found that Hype is now making the default pngs much larger than they used to be.

First I looked at a 2.6MB Hype file made in 2019. The original oam was 2.3MB. I copied that oam, zipped then unzipped it so I could check the size of the default png and found it was 432kb.

I then opened the same document in Hype and made a new oam. This time the oam was 3.3MB. I zipped and unzipped that oam and found that the default png was now 1.4MB.

The 1.4MB default png is the same image as the one that’s 432kb and pixel dimensions and resolution are also the same, so the increase in the png file size is a mystery.

So the case of these two files, the new default pngs are adding between 1MB - 1.5MB to the size of the oam.

I found recently that both the time it takes to create an OAM and the size of the OAM can be reduced by manually hitting the 'Capture Current Scene' button in the Document tab under Poster image.

Still. It would be good to be able to add your own optimised poster image, or omit it entirely.

Not sure why a generated image is larger than the same image generated by previous versions of Hype. Sometimes the underlying image generation tools that come with Mac OS change which can result in different file sizes.

@jonathan made an automator workflow for deleting the unnecessary images from WDGT files and optimizing the Default.png file: iBooks widgets - reducing size of Default.png files in package -- this can likely be adapted for use with the OAM format. Maybe someone with better Automator chops can figure out how to do these steps:

Here's what I have so far:

The manual method would just be to rename the .oam file to zip, unzip that file, drag the resulting folder into Imageoptim, and then reverse the process. (Zip the folder, and rename the zip to an oam file. )

If you install this ImageOptim service, you could right click on any folder to run all images through imageoptim which should automate at least the image optimization step. (This requires you first install https://imageoptim.com/mac )

Thanks everyone, this is all very helpful. My tech skills aren't up to the more complex solution and I'm using the Wordpress plugin, so I tried the zip trick recommended to Nigel. The first few steps worked fine. I deleted the default png, rezipped the folder and then tried to upload it and failed.

Here's a picture of the process. Can you tell me what I'm doing wrong? 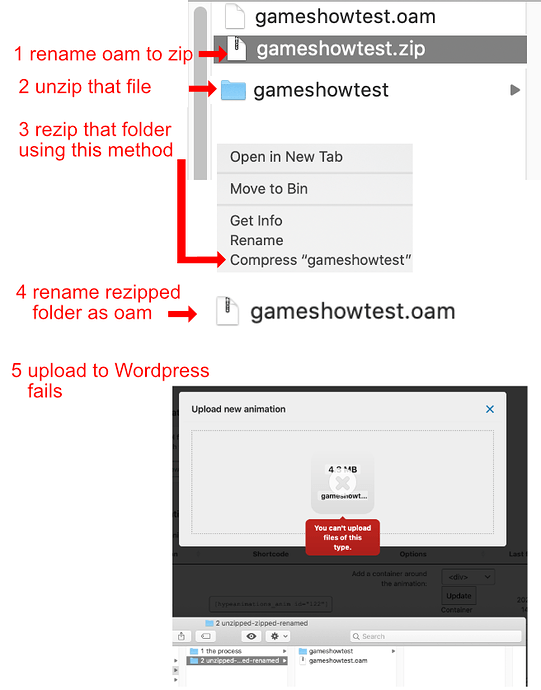 You may need to check the 'Show all filename extensions' checkbox in Finder's preferences: 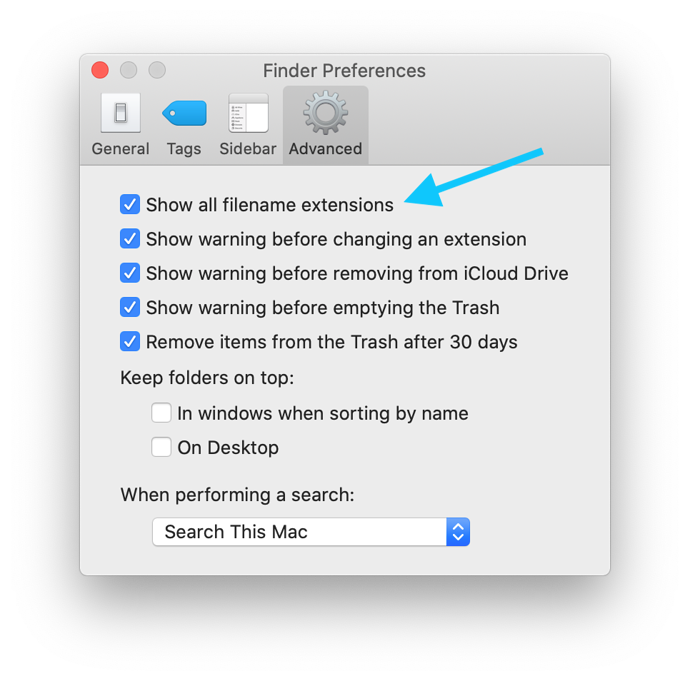 Without that, you may be renaming the file to gameshowtest.oam.zip -- if that doesn't work, can you send your .oam file? (You may need to [ironically]) zip that file before sharing it in the forums.

Hi Daniel, you’re right, that was the problem. After fixing that, I tried to upload the oam and ran into another problem. The file looked like it was uploading to wordpress but the generated shortcode was missing the animation id number [ hypeanimations_anim id=“ “] and the animation didn’t appear on the list of uploaded animations.

At this point I was starting to feel like banging my head on the table, but had an idea for a workaround. I’d noticed that in a Hype document with several scenes, the default png gets made from whichever scene is open when the oam is created. So I added a blank scene to the end of my Hype doc, had that open when I saved it and got an oam of a much more reasonable size. I used the zip trick to check the default png size and it was 194kb. I uploaded this oam to Wordpress and it all worked fine, so I think I’ll stick with using this trick.

Thanks a lot for all your help. Despite going an odd way round, I now understand what’s happening with the default pngs and have a simple solution that works, so we’re sorted

I am in the same boat. We have 1920x1080 files for a server upload and Hype keeps generating HUGE (3-6MB) PNG's we don't need or want in the .OAM … please add a checkbox for automatic poster creation or honor the settings in the Hype document itself.

Makes sense to do - filed. Thanks!