Motion 5 export video with alpha chanel with no video control

Hello, I would like to use a animation created in motion 5 that would run on Hype pro with no video control bar and alpha chanel on if possible. How can I perform that

Below is a screen shot of the Element Inspector Panel with the various options for video - one of which is whether or not to display the video controls. 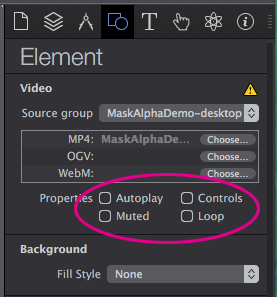 As for the other part of your question the video itself can have alpha channels - but I am guessing You are referring to having the actual video background be transparent. If this is what You mean the short answer is not at this time. This capability (or lack there of) is browser, not Hype, related.

An image sequence of transparent PNG files would be a work around. Unfortunately, Hype does not automate the import of image sequences - i.e. bringing them in a linear fashion and spec the frame rate. An animated GIF would be another option - but it is rather weak tea compared to what a video or animated PNGs could offer.

The following is a further discussion of transparent background for videos:

Can a Video File Have a Transparent Background? (alpha channel) Animation

Gentlepeople: My goal is to create a small “cycling” animation created in other software - which I would like to import into Hype 3.5 - (it could be an animated .gif with transparent background) - overlaying it on another element - a static or a moving background illustration (i.e. a set of background elements exhibiting parallax) . The object would be to animate the cycling animation moving along a path, as a foreground layer against the already animating background layers - thus achieving a …

I came across something recently that might benefit You - perhaps You are already aware of it. If You are considering using sprite sheets with your video work - CSS “steps” function which allows You to simply spec the duration, number of sprites & the repeat of the sheet if desired.

A well written piece about this CSS function:
http://blog.teamtreehouse.com/css-sprite-sheet-animations-steps

If You are looking at a larger scale (number & size of images) than sprite sheet will comfortably work with I am just about to post some an experimental work that might prove of value in your projects with Hype. It will be titled “PNG Sequencer (Particle Emitter)”. I don’t have the URL as it’s not up yet.

I’ve been thinking about this for a while, but your post motivated me to get working on it - Thanks!

I guess this help to create an animation that does not open as a full screen video on an iPhone.

So it could be used with transparent background?