This question is mainly directed at the creators of Hype:

Would it be possible to modify the orientation of the xyz axis in future versions of Hype? For example I want to rotate an object on my z axis, but I want my z axis the set slightly askew. This is often possible in CAD software and a few animation programs, and it would open up a whole new set of possibilities for animation, however I have no idea if it would work within the parameters you guys have set, seeing as Hype animation seems to run in 2D for the most part. hence the question

I am probably missing what you want but do you mean this… as in at the bottom of this image “rotation” ? 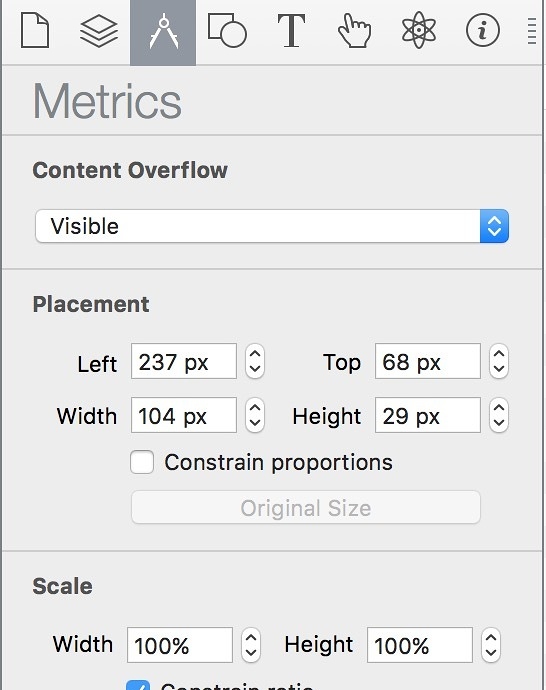 no I mean having the ability to move the xyz axis on which the rotation angles are based.

Yer I am clearly not getting, There is an X,Y offset property that can be adjusted just below where the rotation is. 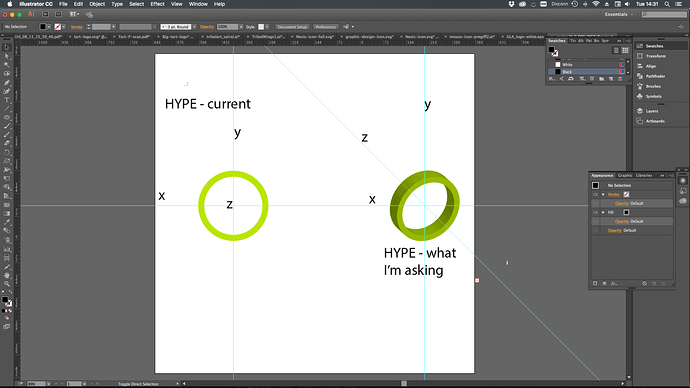 this might help. The idea is if you create a tube in illustrator and extrude it on the z axis at an angle other than 0, you can then bring it in to HYPE and rotate it on that modified z angle, in essence I’m asking i it could be possible to move the xyz axis

I assume then that what you import would not be an image then.

so this thicko can see what you are trying to do

What you are asking for is a kind of option to change the viewport angle so that you can view the axis at a different angle? Like in a 3D environment?

Hype does retain perspective when you transform an object using rotation but I feel this is not what you are referring to.

Also the picture you show looks like it has a 3d object in it. I think this may be a little out of scope within Hype

yep it would, you design or draw an object designed round a offset z axis, and then bring it in to hype, then move the z axis so it lines up with the z axis of your object, then rotate your object on the modified z axis.

Create your Z rotation for an object, then, with the object still selected, go to the Arrange menu and select Group. Now rotate the X and Y of the group.

Right, turns out Mr Hunte is right to feel confused, I was asking a stupid question.
I’ve figured out what I mean, the problem isn’t to do with moving the axises, its to do with the fact that you can’t (as far as I can tell) put truly 3-d objects into a hype project, and that if you design a object in illustrator that looks 3d (using 3D styling), and then rotate it in hype, it rotates the 2d plane its been drawn on. So I guess my question is can you import a true 3d object into hype and then manipulate it using the rotate tool? and if it is possible what format and program would be used? took a while but I got there in the end.

The “import”, if any, would be in an image format (2d) and Hype has no ability (yet

) to import and manipulate in other formats.

Well thanks fore finally clearing that up! So I guess my msg to hype creators would be a plea to introduce 3d manipulation in future versions

again thx everyone for the input

Right, turns out Mr Hunte is right to feel confused, I was asking a stupid question.

I should have elaborated when I said [quote=“MarkHunte, post:6, topic:7602, full:true”]
I assume then that what you import would not be an image then.
[/quote]

The “import”, if any, would be in an image format (2d) and Hype has no ability (yet

) to import and manipulate in other formats.

Is what I was getting at…

Well done Mr @DBear for untangling that one…

No you can’t, but there is an old trick that AE folks used to use a few years back. You can duplicate a rotated object, fill it with an imported gradient, set it behind and offset, then duplicate this several times, offsetting each item to create the thickness. It is very clunky, but if you’re desperate it can work.

He doesn’t want to create the 3D object in Hype … he wants to be able to manipulate one that has been imported in. e.g to be able to move the axis and look at the object like you would in say … blender.

Good “trick” for creating a 3D looking object though.

If the real deal can’t be achieved, this is a way to address the issue.

One other AE trick - that might be used in Hype - is to create individual faces for an object like a cube. offset and rotate the faces into position, then place this within an object and rotate the object. (In AE one would create a null object to serve as a parent and rotate the null.) This can be used for buildings, etc.

Hype is based off dom elements not canvas or webgl so it runs fast on old devices. I don’t think this will be implemented for this reason, if you want to be able to do 3d animation in web you may need to look into three.js or if you want a visual version look at Unity and the web Unity player

Hype on its own makes a noble attempt at 3-D, accounting for relative vanishing point and such. My first attempt was a darkroom look with photos clothes-pinned to a curved horizontal string. Move the mouse across to make individual photos swing, compounded by having the string swing very slightly. The perspective was not perfect but after taming the action a bit, it looked great.

For many, the best solution is to create the 3D elsewhere and bring it in as a video. Along those lines, one thing that might bea nice addition to Hype would be to emulate what Flash can do in embedding a video, which makes it easy to control the video various actions (such as a seamless loop that can also be used as a transition.

Can do this animation with javascript? Without timeline?