http://www.mysite.com/doctitle.html#SpecificSceneTitle
only brings me to the first scene in the document.

These don’t explain how to get to a specific scene from a link in a different website.

This explains only how to get to a scene from the same website.

This appears to just work for a link on the same page as well.

What am I overlooking?

Tumult Hype documents are accessible from a single URL. If you name your document ‘Flying’ and upload it to your site, then your animation and all its scenes are accessible from http://site.com/flying.html (unless you change the name of your exported .html file). This article describes three ways to navigate between scenes: Load a scene directly from a URL (For example: http://site.com/hypedocument.html#contact) Use a button outside of your Tumult Hype document to load a scene in that documen…

Thanks h_classen, but those examples only link to scenes on the same page as the Hype document.

I’m trying to link to a specific scene in a Hype document on another website. For instance, a there’s a link on a blog to a site with a Hype document and I want scene 3 to show.

How do I write the url? This format does not work:
www.mysite.com/doctitle.html#3

That other Hype document needs to run ‘on scene load’ the JavaScript code listed in the post. It listens for any #text, and if it matches a scene name, then it loads that scene.

I need to link to a specific Hype document scene from a website that does not contain a Hype document. Possible?

I need to link to a specific scene on my Hype document page from a separate website that is not a Hype document. The article does not explain if that is possible. Is it?

Thank you for your patience.

By split your document, do you mean create several different Hype documents on different .html files, so that each scene becomes it’s own document on it’s own .html?

This is the simplest approach IMO… no scripting.

• Then in “Advanced Export…” (“File” menu) export the desired Scenes. 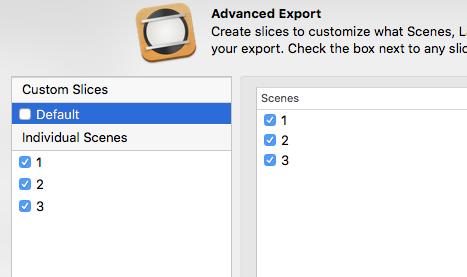 I upgraded to Pro and now I can do the slices! Thank you.

Scene transitions no longer work when I use this method?

those are individual files. please try my previous hint and consider Daniels too:

That other Hype document needs to run ‘on scene load’ the JavaScript code listed in the post. It listens for any #text, and if it matches a scene name, then it loads that scene.

I think the overall issue is that our OP @janlucvd does not understand the Documentation… if one is not conversant on at least an intermediate level of JavaScript @Daniel’s description could have a high “fog index”. (The continuous rub > JavaScript literacy - not Team Tumult’s responsibility > but omnipresent none the less.)

@janlucvd’s question involves transitioning between web sites - an example of this scenario is not explicitly demonstrated in the Documentation (i.e. there is no source~target page set-up).

Also, there is an facet of this process that has not been addressed, and is part of @janlucvd’s inquiry. The Documentation assumes that one just jumps (i.e. “instant” transition) from one web site to the other. But suppose You want to do a X-cut (fade) - or something other than an instant transition - then what? I will address that question later in this post.

@janlucvd - here are (2) Hype Demo projects SceneWebSite Transition.zip (41.1 KB)
that use the code that was under the heading “Linking to a Scene using an URL” in the Documentation. These two Hype projects represent the “source” web page and the “target” web page.

This code creates a “named anchor” (using an ID such as “3”) for a Scene (div) - which sends the browser specifically to that Scene (div) on the “target” web page.

Note: In the typical Hype environment all Scenes are on one web page; each Scene is a “div” on the page.

So now that we know that, we set-up our links from the “source” web page to the scene in the “target” page, as shown in the attached Hype Demo projects above.

But we are not done…

There is no provision in the Documentation for transitions other than “instant”. So what we need to do is create the Scene transition of our choice, say a X-fade, on the “source” (“Website 1”) that appears to go to the “target” website (“Website 2”)… but actually the whole transition occurs on “Website 1” - and then jumps to “Website 2” (please see Fig.1 below).

No matter what You do there is going to be a visual interruption, even if it is a micro-second, as the new page loads… so keep the landing page lightweight for best effect.

That is a good point… I think I am also a candidate to often overestimate this point with the OP’s! Nice mediation post!

You can still use the approach in my first post in this thread > splitting a Hype project into individual HTML documents for each Scene, and then use the transition technique I mentioned just above for those transitions that are not “instant”.

Creating individual HTML documents may be of use in a particular circumstance. As with many design situations there can be several solutions - with the best one dependent on the particular needs of your project (and your skill set).

Brilliant! Thanks for your patience and explanation. It’s much clearer now that I have Hype Pro

. Do you have a document example for Fig.1 ?

Don’t tell me what OP stands for

Glad things are becoming clearer for You!

Here are the (2) Hype documents used in the Fig.1 example: SceneTransitionToWebsite.zip (32.6 KB)

BTW: “OP” stands for “original poster” i.e. the person that started the topic~thread.