Hype as Design Software — The Photics "Code of Honor" Shield 🛡

Apple is getting tougher about privacy. That's great, because Photics apps are quite innocuous in such matters. The "Code of Honor" page explains the story... 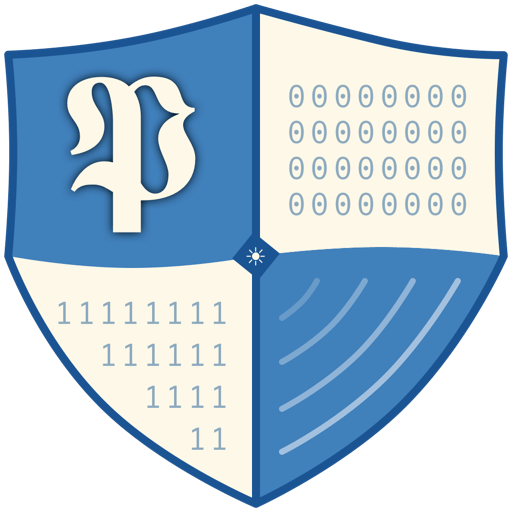 As of December 2015, Photics software (apps, books and games) follows a strict code of honor. Photics Software Does Not...

Isn't that a cool double meaning? It's a code, like an honorable way to live, but it's also code as in programming. That's when I imagined the two worlds combined. I pictured a shield with zeros and ones on it. That idea was in my head for a while, but it wasn't until today that I made it real.

One of the problems was not having an illustration application that I liked. That's when I though... why not just use Hype? So, I tried it. The results are not too bad.

I was able to put a lot of symbolism in the shield. The wavy line across the middle, that represents water, as "Photics" means the science of light — particularly in areas of water reachable by sunlight. That's also signified by the circular lines, like ripples in a pond. The "P" also represents "Photics" and there's a sun icon in the middle.

I exported the artwork as PNG. Originally, I forgot to set the background to transparent, but otherwise no problems. Well, it's not a vector format. While it is technically possible to make this an SVG, I imagine that would involve some tedious work. This is good enough for the page... and a lazy Sunday. HA HA!

Photics.com still could use an overall logo. Will I use Hype to make that one too? Eh... I don't know... maybe. The shield was a fun side project. A main logo would have to be more serious. I don't want my vector artwork trapped in Hype.

If I go with a crazy idea for Widgets / Apparatuses... https://www.walletninja.com/custom/ ...a Photics logo would be useful. Since my app is a virtual multitool, it could be cool to give away customized versions of the Ninja Wallet as a promotion.

Anyway, the point is that Hype surprised me.

One of the problems was not having an illustration application that I liked. That's when I though... why not just use Hype? So, I tried it. The results are not too bad.

Sshh... they will raise the price..

I do this all the time,
When I need a graphic, I without thought turn to Hype.
The last one I did was a work colleagues Christmas card, which they then sent of for printed versions.

So why is it possible for me to edit the header of this thread?

So why is it possible for me to edit the header

It's not a forum anymore. It's a Wiki

I think the forum is set to have trusted members have moderator-level permissions. I have all sorts of crazy access too, but I rarely use it. Typically, when I see something bad, I just use the website's report function.

...did you get any new badges recently?

Yep, I’m a trusted member I found out