Groups on a timeline

What is the advantage of creating separate timelines? Asking generally, not specific to this particular thread. Seems more complex?

Having separate timelines can help break down complex animations and give you better control, this includes interaction with the javascript APIs that can be used to control the timelines.

Instead, you have to convert all groups to symbols, or give each group, as you say, an extra timeline.

Hype is software not a magic wand. If You find adding a timeline an issue… possibly You are in the wrong business.

Hype is software not a magic wand. If You find adding a timeline an issue… possibly You are in the wrong business.

I am always happy about constructive contributions!
Yes, hype is far from magic, but i could be in some way. And no, I’m not in the wrong business. But, it seems you have not understood my point of view in the approach.
Meanwhile, Jonathan contacted me. He understands what it is.
Simple animations or whatever should also be easy to create. Not by adding many functions, scripts and to much nesting objects. Keep it simple if the task is simple.

May be, that helps!

@Mischu
As @MarkHunte mentioned above, an example Hype project showing what You are trying to accomplish (and/or what is giving You a problem) would be useful. Written descriptions alone are not nearly as informative as seeing the actual project.

As @MarkHunte mentioned above, an example Hype project showing what You are trying to accomplish (and/or what is giving You a problem) would be useful. Written descriptions alone are not nearly as informative as seeing the actual project.

Once again clarification.
The topic should perhaps be moved to the Feature Request area.
I can not und 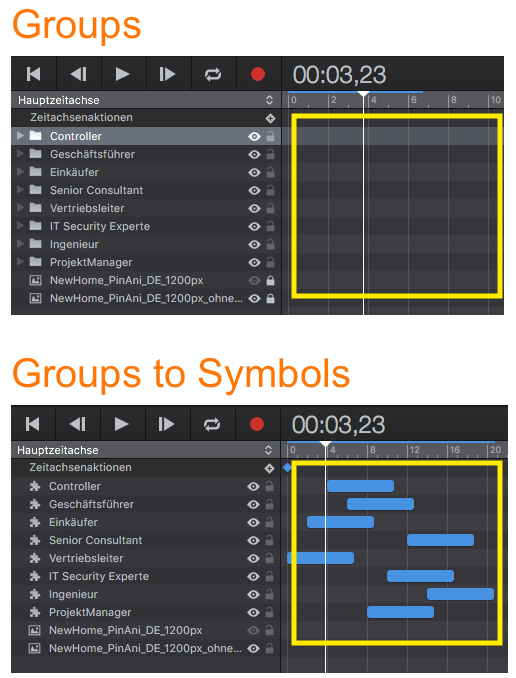 erstand why you need a symbol to represent a group.
That’s all!!!

In that example you have no actions on the the groups but then make them into a symbols and give the symbols an action on the time line.?

I am wondering if you mean you want to easily select all the actions of the children in a group and move them all at once to a new time in the timeline.

But the example you show does not quite show that so I am still at a loss if that’s not it.

Moved it to feature Requests … in my opinion a good one:)

I am really happy!!!

Looks like my wondering was right. And I agree this would be handy to be able to do.

I guess it would be good to be able to select any elements in the list not just grouped and have an option to move all of the actions in one go at the same time more easily than having to click, click,click… each action to select them and move at the same time.

May be it coud be useful to work with color codes

Thank You for your example…

Your request - a good one - has in essence been requested before by @TYancy that has the Hype interface change its behavior (details in the post by Trey below); where groups are easily arranged on a timeline and their actions~effects follow them.


Having worked with _Hype_ for a year now and Apple's _Motion_ app (similar in interface to _AfterEffects_) for many years - I find the motion graphic style of interface much easier~efficient to manipulate than Hype's current model.

• Add duration setting for items in timeline. • Add draggable visibility handles at start and stop of items in timeline to set when the item is active. (In Hype-speak, a block can represent an object, a grouped objects or an animation in an alternate timeline - essentially an encapsulated animation - editable in its own world similar to a Hype symbol). • To edit an item, click on it in the timeline, or on its block within the track, or click on the object when it is active on the stage. If …

Do you have experience with Motion before Apple got rid of the dockable palettes?

Back then, Motion was my favorite app by far. Among other things, they way you could control just about every element with ease was a world-changer. Once they got rid of dockable palettes and shoved all the tools into nested tabs within a single screen my productivity was shot down in flames. I’d say it slowed me down by 80% and the incessant digging through tabs drove me batty. As a result I returned to AE. It was the only way to maintain my productivity and hit the deadlines.

This leads to another suggestion for Hype (although not as big a deal, as the UI is not as complex) – I’d like to be able to place all the elements of the interface where I wish, so that I’m not constantly having to mess with the window as I work.

Do you have experience with Motion before Apple got rid of the dockable palettes?

I miss the palettes… but still love the program.

I can work three to four times faster in AE. It isn’t as cool and I miss the features of Motion, but my workload is like navigating a herd of stampeding buffalo – frantic from 7:30 a.m. to 5:30 p.m., with time for lunch only two to three times a week Stupifying, but real.

Apple tends to have a tunnel-visioned approach. With the overwhelming popularity of laptops Apple didn’t see a need to continue its more vigorous support for multiple monitor rigs so instead of continuing something that would be appreciated by its serious pro users, it just lumps everyone into the basket. I remember how great iMovie used to be - it was enormously appealing. Even kids were using (and teachers, which is special because they are usually far too overwhelmed by the workload to spend time learning such an app). It was extremely intuitive. I used to demo the app for Apple when it first came out. Shoppers were blown away at how fast they could assemble a movie.

When Apple brought in the professional video guy to redesign it and they took the cool new cutting edge approach that filled the screen with an ocean of still frames, they killed off a vast number of users who were confused by all the visual clutter. Many people love the new version, but I would not put it in front of a teacher or an elementary school kid and ask them to guess how to use it.

Apple has always had an ivory tower approach and I’ve been using their products since 1989. Over the past 15 years (right up to today) I become nervous when upgrading anything from Apple because of what useful features might disappear.

Double dittos on that one. Apple user since 1983, Mac since 1988. I long for the days when the Apple Human Interface Guide was the bible. I have an original printed book.

They took their biggest advantage and started chopping away at it piece by piece. Probably most current users never heard of it.

In the New World, its considered cool to choose Different and New over Better, it seems.

Ah well, must have caught me on a grouchy day.

But the Hype guys stick with those guidlines better than any one else. No one is perfect but…

I’ve heard it mentioned elsewhere on the forums but if Hype could incorporate dockable palettes it would make my life easier. I am a dual monitor guy and I like to have everything open and in a specific place on the screen so that I can instantly reach for it, click and go. Digging through tabs, expanding and then collapsing inspectors to see the stage again, etc., — this creates a productivity hit for me. It certainly makes a big difference with all my Adobe apps (and I use seven of them constantly).

And other set of dittoes. I also use dual monitors , 1 19 inch and 1 21 inch. I still find myself doing a lot of expanding and collapsing of inspectors and panes within the main window… And I have just never gotten comfortable with the widescreen view. I should give it a try more often.