Hype seems to have a glitch when you select a scene transition, the rectangle buttons in the hype file attached have actions to jump scene with fade transition and thus the two buttons glitch out of place for a second when you click one of them. Is this a known issue?

I skimmed through your settings…

Under the “Flexible Layout” section of the “Metrics Inspector” You have different settings for the same element in different Scenes causing the elastic jumping around of these elements. There could be other issues but this inconsistent setting issue caught my eye. 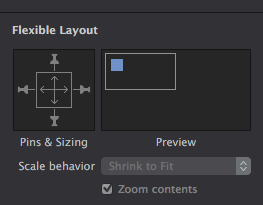 The Flexible Layout setting for the same persistent symbol in “Scene 1”: 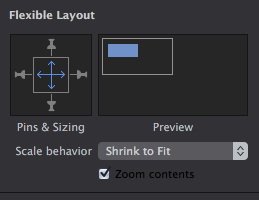 @JimScott’s answer is correct when comparing scenes, you’ll definitely want the flexible layout of the group to match. On the first scene I recommend turning off all pins (but keeping sizing) so the group will grow proportionately with the scene; as it is now the group can collapse down to 0x0 easily on smaller windows.

There’s another case where the symbol will “jump out” during the scene transition. The issue is caused by it literally doing just that - the persistent symbol once existed in a flexible group, but when doing the transition Hype has to take it out of this group, put it over (or under) everything, and then when the transition is complete, put it in the new scene’s group. So during the transition period the container’s flexible layout settings won’t be applied because it is not in the container. The workaround is to not put persistent symbols within a flexible group. (I do consider this a bit of a bug).