Filter Effects Are OK In Firefox, Yes / No?

I'm working on a new video for Photics.TV that involves the use of new web features. One of the features to be discussed is CSS Filter Effects. I'm still working on the script, but I was planning to mention Hype, as this is where I learned about Filter effects. However, I noticed a problem…

Hype lists Firefox as not supporting the feature, but doesn't this work just fine in Firefox?

Firefox 66 didn't have the full range of CSS filter effects that the latest version has. You can hide these warnings by selecting 'Latest' under browser compatibility warnings: 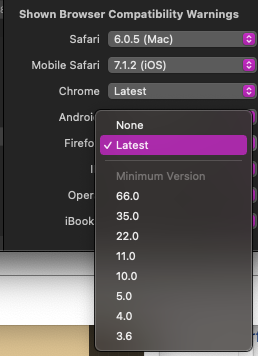 Firefox 66 didn't have the full range of CSS filter effects that the latest version has.

I'm not seeing mention of that on the caniuse.com website. What doesn't Firefox support?

Looks green over there. I don't know where Hype is getting its browser compatibility data, but maybe it should be from Can I Use?

You can hide these warnings

Oh I saw that. I was planning to hide the Firefox warning so people don't get confused and Tumult Hype looks good.

We generally just monitor browser release notes so we can do testing or make changes when there are compatibility improvements. Sometimes we check caniuse.com if we're a bit late to the party to figure it out.

We have the correct version in place, but you are seeing this because of a typo bug in our check! Filter Effects should not give a warning on Firefox >= 35. This has been fixed for the next release.

(I also found drop shadows have the same incorrect warning, as they are also based on filter effects)

Thanks for telling us about this!