When the creative is being loaded I am being told by Ad Ops that it is pushing the page down as you can see in the attached screen grab. 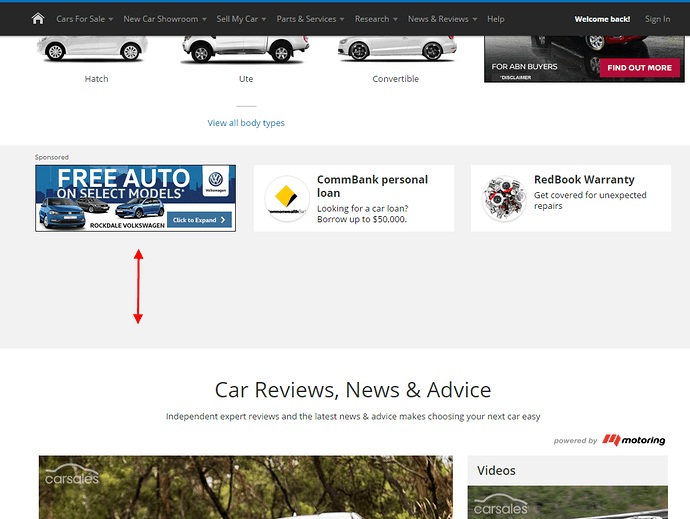 It looks like the 300x250 Scene if doing this, even when its not currently visible. Does anyone know of a fix for this?

Thanks for any help - Cheers Brett

When you inspect the element with developer tools, do you see the Hype document fitting a space larger than the visible box?

On most Adserver or Campaign managers mostly support their own HTML-Creatives. Some do not know how to work with third-party software generated creatives. Depending on the Viewports set.

For instance this sitebar works live outside of the controlled world of the adserver but I could not test it’s expansion in the campaign manager at Flashtalking. It took some time to work with the engineers at Flashtalking to be able to change their viewports for the trigger to happen.

Another example is the U-Shape Creative. This is run on the Google DCM server. But Google’s own options only allowed slight change on the width or height of the placed creatives. This rendering the somewhat larger Banner wrong and pushed it into a standard UAP Creative size.

Do communicate with the Adservers employees and try to get an engineer to have a look at your creative. I find the most resistance from people who work on a Windows environment. Due to the fact that they cannot test and have a go at Hype. <— Very important for @Daniel @jonathn

I’ll also have a look at your Creative to see if a push and viewport do the same. Do you have a live test-link? This creative alone will not help. I or we would like to see it in it’s environment and how many iframes are used to nest this hype-document.