Équivalent of HTML function "Named Anchor" in a Hype document

My problem here is that I want to do the same in a full Hype document. For example, an arrow at the bottom of a lenghty tocument to automatically reach the top of the same document.

Can I get some help here ? It would be so appreciated.

This demo is based on this thread’s example (@Daniel who references @h_classen ) which has jQuery script dependencies (95K).

I have made some modifications to the file - some cosmetic & some functional. The functional changes involve controlling the speed of the scroll. The speed is set by two scripts - “scrollSpeedMedium” & “scrollSpeedInstant” both of which make a small change to the number in the script. This number represents milliseconds:
AA_CONFIG.animationLength = 500; (Medium)
AA_CONFIG.animationLength = 10; (Instant)

You can set the milliseconds to what You wish, though I find it can get a little jerky if the number is set to 1000 (i.e. 1 sec) or above.

The button~trigger which references the target ID… 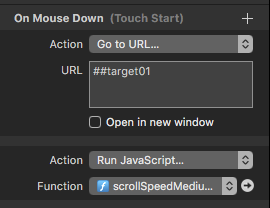 And the ID of the target (“named anchor”) which is set in the “Identity” panel as usual. 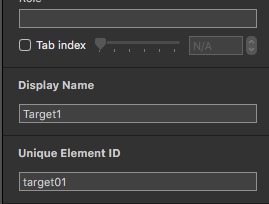 you also may have alook at @MaxZieb’s extension

hypeDocument.scrollToSelector As this thread is mighty old, I added a new variation on the topic. This version supports callbacks and any selector as a target. It is written as an extension and based on a teeny tiny vanilla JS library (1.9kb) called window.smoothScroll and has no other dependencies (like that bloated jQuery). Hype Extension Code (What is an extension? Learn more about the extension project …) /** * hypeDocument.scrollToSelector 1.0 * @param {String} selector * @param {Number…

Far more lightweight - thanks for pointing this out & thanks @MaxZieb for all the work You have done on this “Extension” project.

Thanks to all of you. I will experiment your suggestions ans give a feedback if it works.

Thanks so much for your suggestion !

thanks @MaxZieb for all the work You have done on this “Extension” project.

Thank you… although that code snippet linked above by @h_classen isn’t an extension. Just a wrapper to the work from a talented woman on GitHub posted under the tag #scrolling.

Also there is a native way (CSS) to do this now …