No issues with Whisk, but thought to show this since it makes editing a bit nicer IMO.
Check out the Open Source JetBrains Mono font.

Once you have it installed in your system you can go to Whisk prefs and change the source editor font, then go to the Typography submenu under the “cog/gear” icon and there you can further control typo extras and alternates. Nice. 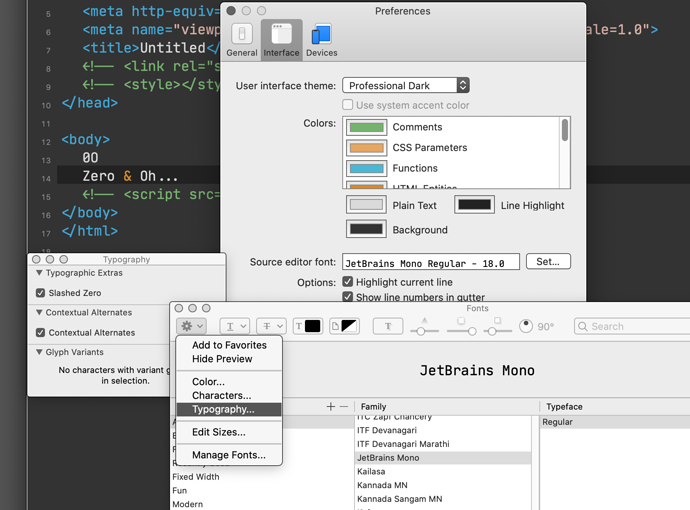 I’m a big fan of Monaco 9-10, but they never looked right on retina and do not have bold weights that have become common usage in editors and terminal apps. I have tried many fixed width alternates but struggled to find one I like more. I tend to default to Menlo or SF Mono when I can’t use Monaco, but…

JetBrains Mono is great! I instantly changed Xcode to use this for development.

Since it is open source, I’ve even considered including in Whisk as the default font, but that might be going too far.

In theory the ligatures should be nice but I find that in writing code without them for ~25 years they are hard to properly grok. This is especially the case for double-equals which is pretty important to distinguish from a single equals/assignment operator. I would also not want to use ligatures as a terminal font. I hope they have an official non-ligature option in the future.