Control a symbols timeline inside the symbol itself

From the description it sounds like you’re actually doing the right thing (but clearly not getting the effect you want), so I’ll just give a higher level description on ways to manipulate symbols and hopefully that will provide you the right direction.

Definitions (so we’re on the same page)

A Brief Note on a default Symbol Action

When a Symbol Instance is created on the Scene, Hype will automatically give it a Symbol Action to Start the Main Timeline (on the Main Timeline of the parent symbol or scene). By virtue of this we get behavior similar to Scenes – the Main Timeline of a Symbol Instance will always get kicked off. This can be removed/modified and there are certainly ways in which the parent timeline could manipulate this running. Hype adds this as convenience so that you aren’t stuck wondering ‘Why isn’t my symbol running?’ and needing to always make this action yourself.

If you select a Symbol Instance and double-click or choose ‘Symbol > Enter Symbol’ the changes you make be for the symbol and thus affect all instances.

Thus you should be able to add a Timeline Action that could choose ‘Go to Time in Timeline’. The listing of timelines is for all symbol timelines.

You could also add actions via the Symbol Inspector (which replaces the Scene Inspector when inside a symbol) such as On Symbol Load. The timelines presented for the timeline-specific actions also reflect only that of the symbol. 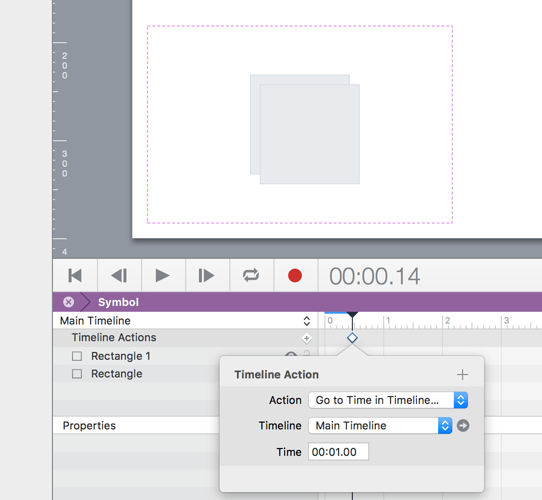 Ways to control a Symbol Instance from outside the Symbol

While Symbols themselves all have the same elements, timelines, and animations, they contain their own state and can be controlled separately if need be. Here are the way to specifically control single symbol instances in ways not defined within the Symbol (and probably not what you want, but I’m listing them as this might be what you are doing instead):