I did a little test to see what happens when you run two timelines at the same time, and both are trying to animate the same property in a conflicting way. I started them with a button thusly: 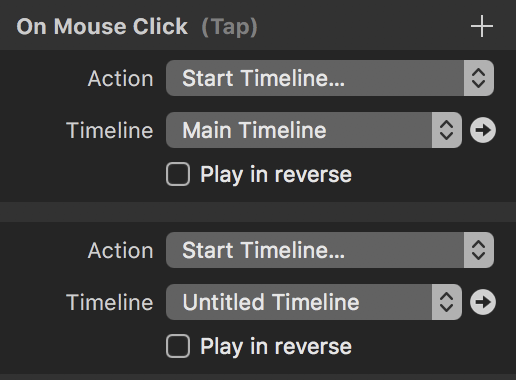 It seems to me that where there was a conflict, it gave priority to the lower timeline in the list.

However, if there was no conflict in a specific property/channel... then both timelines seem to run fine together.

Is this the expected behavior?

I was sort of hoping that where two timelines were running... that the results would be additive

[Edit: I found a way to make them effectively additive by grouping the element and applying the conflicting timeline to the group instead of the element... maybe there is a better/intended way to do this...]

This is expected behavior. Individual properties of elements have a timeline that "owns" them. The owner is set when a timeline is started. Therefore the last one to start is the current property owner.

This prevents ping-pongs of the value of a property from competing timelines. It also allows for the same element to be animated by two different timelines - one could animate the top property and the other could do the left property, for instance.