I wonder if it would be possible to have a multi-channel system in Hype so that two channels could run concurrently, drawing on a common resource folder. I’m not talking about alternate timelines within a single scene, but separate channels - one for the main animation and the other for other content or, in a more basic form, as a dedicated control channel, such as for loading content into memory.

Example: The animation loads the initial content for channel one, scene one, and starts playing. The viewer is engaged for ten seconds. At, say, 05:00 channel two fires up and loads additional elements for scene one (or loads elements for scene two into memory but does not display them). When channel one moves to scene two there is no time lost for loading large elements. This can repeat, caterpillar-fashion throughout the duration of channel one.

Procedure -
Create project with all scenes and content in channel one. Scenes are automatically aligned in channels timeline per the Scenes pane.
Add keyframes to channel two, using load > file popup to navigate to desired art or symbol, and trigger popup to indicate desired action.

Loading delays are largely history, as the only thing that affects this is the content needed just to display the first few seconds (such as an preloader / introductory “slide” / or the first seconds of scene one). In the illustration, the only object that needs to load to start the presentation is object one of scene one. Everything else loads in the background on the fly.

One version or other of this approach (specifically, a control track for performing various tasks, including loading) has been available on the Macromedia side pretty much from the start. 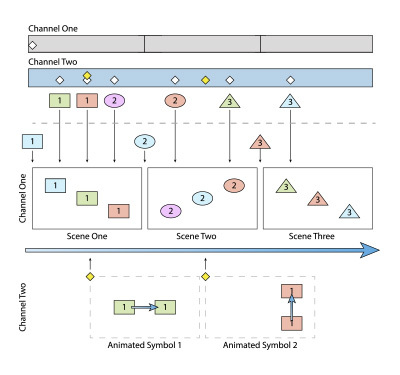 That’s an interesting thought. To speak more to Hype terms - we’ve had requests for finer grained control over preloading for a while. I’ve had some thoughts on how to do it, but this brings up an interesting notion in my mind that there could be a “load resource” action. Instead of different channels, a user could make an action to decide when they want a resource preloaded (which would be in the background).

Do this and I’ll name my next seven sons Jon.

YES… A “load resource” action (and unload) would be a beautiful thing!

I’d like to see the combination of a load action with a shared resources folder. The latter would add an element to the Document inspector: A “shared resource folder” checkbox with a field and button for navigating to the folder) this would include a string to scan for mod dates of duplicate files and the related cancel / okay dialogue box.

A shared resource folder is an interesting idea. More specifically I do want to add the ability for a “reference resource” where instead of Hype managing the file, it could simply be a pointer to a URL.