Can't find in Hype's Help info about the UI Preferences

There are new features in there that I would like to explore. In English it's OK.
Thank you.

There's really not too much to those settings... 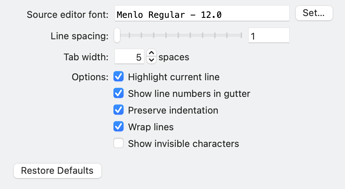 Most of the settings can be explained with this screenshot... 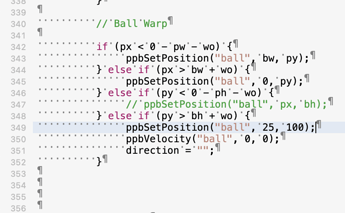 This is while editing JavaScript code. (Many of these preferences do not affect the editing of "Inner HTML".) The screenshot shows code from the "Jump" template...

Can Hype be used to make games? That was one of the primary objectives for A Book About Hype. Hype...

The line space is set to "1" because I don't feel like scrolling a lot. But if you want to make reading code easier on your eyes, you could set it to higher than 1, but up to the number 2.

The tab width is set to 5. There are two indents in this block of code, 10 spaces. Inside the conditional there are three indents, 15 spaces. It's just to make it easier to read.

See the blue background across the line with... "ppbSetPosition("ball", 25, 100); ...that's the currently highlighted line.

Do you see the numbers on the left side? 340... 341... 342... 343... those are line numbers. I'm not sure I'd use the word "gutter" though. I think "Left Margin" would be a better description. Not only does "gutter" have a negative connotation, it's kinda confusing. In print terminology, a gutter is the space between pages... it can also be known as the space between columns... I don't think the word applies here... http://printwiki.org/Gutter ...I think I'd sooner use the words "left side" or maybe nothing at all. "Show line numbers" should be self-explanatory. At least, it would be if this section had a header. Perhaps it should be its own tab for JavaScript code editing.

The screenshot doesn't show "Wrap Lines", but if you use use this feature you'll probably want to use it with "Show Line Numbers" option. When a line of code is wrapped, that wrapped line won't show a line number. That's because it's still the same line of code. When you see a space between line numbers, it means that text was wrapped.

The screenshot does show invisible characters. The spaces and line breaks have symbols representing characters that you can't see. I usually leave this option turned off because it makes the code harder to read.

Thanks so much for chiming in with your explanations @Photics! I realize that we forgot to add specific v4.1 documentation about the new options. Do you mind if I steal bits from your descriptions?

That's so negative sounding. You asked nicely, enjoy the documentation.
It's not illegal if I give it to you.

I realize that we forgot to add specific v4.1 documentation about the new options.

This is new? I was wondering if I forgot to mention it in A Book About Hype.

Not at all, in fact I'd call it arrogant since I'm referring to myself as a "great artist"

Yes, it is new to v4.1 -- taking options from Whisk and bringing them to Hype. These were all generally requested at one point or another.

... in fact, I realize now it is already documented, just in Whisk's docs