Continuing with the 10-year plan, game #2 is now under construction. It’s finally at a state where other people can start looking at it.

This game has been done before, but I’m putting my own theme on it. Instead of water or fire, it’s going to be electrical. That explains the name. The goal is to get the electrical cable to go from one side to the other.

The artwork still needs work. Actually a lot of stuff still needs work. Yet, all of the tough programming is done. The game can detect a path from the left side to the right side. The pieces “disappear” when completed and then “new” pieces fall in from above. (They’re actually the same elements, just with the angle and background randomized.)

During the past few days, as I solved some of the really tough technical challenges, I was really happy. When the pieces properly fell into place, I cheered like I was at a sporting event. When you’re at a big game, that’s quite normal. But when you’re quietly working at your desk, and then a mighty yell erupts, it can be quite unsettling for those nearby. HA HA.

The plan is to finish the game this week. I don’t know if I’m going to hit that deadline, but I’m trying. I think that’s enough for today.

Heh, so no. The game isn’t ready yet. While it is quite playable now, and it looks very professional, it still needs more work to be a success on the iTunes App Store / Mac App Store. Since I put so much work into this project already, I don’t want to rush it.

One of the things I like most about the progress of this Hype project so far is… Hype. I believe that Hype has the potential bring back the golden age of Flash gaming – with HTML5 gaming. (If you’re not familiar with the history of Flash, there’s a nice video about it on YouTube.)

It is probably better there’s no telltale way to know - the signs you were using Flash was usually a weird, non-native interface!

We used to have a “built with hype” label option, but over the course of time went from it being on by default, off by default, and then finally got rid of it. We’re happy enough if we get a mention in the credits

Working on it. Here’s a preview… 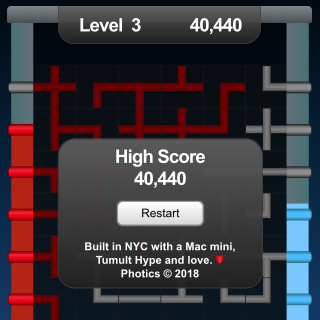 I think the game is good enough for a 1.0 version. I even have it running in Xcode now. There’s only one issue left that I’m still debating, iPhone ratio. The game is great in a 3:4 ratio. That’s an iPad. The iPhone ~9:16 is a little spacey. I’m considering a custom layout for that ratio.

Wow, Apple is on point today. I finished up a tough day of working on the app and then uploaded it for review. About an hour later, it’s on iTunes…

I still have to create and upload the Mac version. What’s nice about the iOS version is that it mentions Tumult Hype right in the screenshot.

Ha, thanks! Congrats on the release

Are you going to have a larger iPhone X layout?

Are you going to have a larger iPhone X layout?

Is it doing the black bars… or do you mean in general?

I think this is one of the lessons from this project. There are so many different ratios and screen sizes. The design for this project isn’t as flexible. It fits just right on a portrait orientated iPad, but for iPhone there’s extra space. I looked at what other puzzle games do to solve this problem. A lot of them use images. I played with particles, adding a background, resizing the board, I wasn’t satisfied with the alternatives.

A while back I suggested that layouts could be more useful if they worked on ratios, rather than breakpoints. That way, I can create specific layouts for common screen types… 4:3 iPad, 16:9 iPhone, 2.17:1 iPhone X… but I suppose I could do that with JavaScript. Just load a specific scene based on ratio. The problem is if you want to support landscape and portrait. I think layouts would be better for that, but breakpoints alone are not enough to juggle so many screen sizes and both orientations - portrait / landscape.

The main problem is the number… 2.17:1… that’s nearing panoramic sizing… and then there’s split-screen on iPad. It gets nuts. Ultimately, the game is fun, so I launched it. I’m not sure if I’ll be able to fix this problem, but it is something I’ve been thinking about.

Yes, it has the black bars at the top/bottom.

Yes, it has the black bars at the top/bottom.

That I might be able to fix. It can at least be filled with the background color. This wasn’t a problem with “Circles with Grandma” game?

UPDATE – There’s a conflict. In order to turn off the double-tap zoom / pinch zoom gestures, it’s disabled in Xcode. However, to expand the size of the scene for the iPhone X, I use the following code in the Header HTML…

I’m not sure why, but this causes the project to zoom to 1x rather than fitting in the window. (That’s bad!) I can’t have both techniques running at the same time. Since removing double-tap is critical for this game, using the “viewport” method won’t work. I think I have an idea that might work though.

Another Update – I did some additional testing today and I wasn’t happy with the results. Apple really screwed things up for game makers by disrespecting the “user-scalable=no” setting. Even if I can balance the zoom / viewport issues, there’s another problem with the iPhone X. There’s this black bar at the bottom. It goes right over the message display box in landscape mode. I don’t have a good fix for this, so I’m leaving the app as is. I don’t know if I’ll change my stance towards the iPhone X in the future, but it was getting too frustrating.