Bug or inherited feature of macOS

Pretty sure this is a known issue. Cannot find where it was explained though. I think it is part of how hype and Macos communicate with regard to file bookmarks/sandboxing.

If you right click the file in the panel to get its contextual menu. You will see replace.. 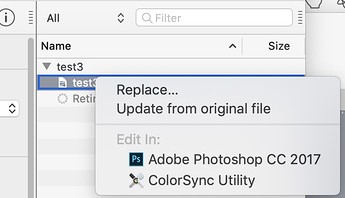 Use the replace and you should not have this issue.

The image group name may remain the same though, which I would expect as normal behavior.

From my experience with "Export to Hype".
Hype stores and creates a MD5 and some meta information (shouldMatchToExistingResource) and additionally even a system signed fingerprint in its PLIST. BTW, When developing the plugin I removed linking the files to an external file as it requires App/Developer level access for macOS to do it. My solution in Export to Hype was the ability to replace a resource after the fact from an image file only export. To return to the original question I think that it's a matter of cleaning out the PLIST when removing an item from the library @jonathan?

This is a known issue and is slated to be fixed.

To return to the original question I think that it's a matter of cleaning out the PLIST when removing an item from the library @jonathan?

Basically, but it's a bit more complicated than this. The document's resource library is in a good state. Hype has to keep deleted resources around in cases like you do an undo or a cut operation where the resource is orphaned from documents but needs to stay somewhere on disk. In memory isn't an option, as resources could be multi GB movies, so the application itself has its own temporary resources library where resources stay on disk. It finds a match in this app-level library based on the contents of the file and restores the matched version, but right now misses that it should change the name for the document. Thus a workaround is to delete, quit Hype, relaunch Hype, and the move in the image.