Animate an object on a closed path

[You need to add “Animation on vectors” in the categories of the forum.]

I wanted to create an animated Solar System with Hype and I realised that it is easy to move an object from point A to point B and then to change the line into a curved path.

But how to just select an object and a circle and make the object rotate following the path of the circle? I tried to open the circle or to find it's beginning, I tried to recreate a circle from a straight path, but that's A. complex B. not perfect.

I used another method with a “straight wire” that connects the Moon to Earth, and then a wire that connects the ‘Earth+Moon’ symbol to the Sun. It's OK if the orbits were perfect circles but they are not, they are elliptical. And this is were it requires a lot of additional work.

Can you please confirm that making an object to follow a path that we select separately is impossible?

The result so far

you can change the origin of the element that should rotate. may help

Thank you for the proposal, it can be useful in other cases.

BTW, how did you figure out the X Transformation value?
I can't select the Moon's reference point to position it on the Sun.

draggable by a shortcut. but i'm not on a mac atm

Can you please confirm that making an object to follow a path that we select separately is impossible?

I cannot confirm this, because it is possible

Vector Shape paths can be pasted onto animation motion paths. 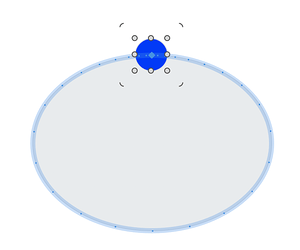 Of course, a purely circular animation is much easier with an anchor point.

The fact that applying morphing between paths / and / motion on paths via an obscure method of Copying and Pasting makes it odd, unintuitive and complicated but at least we can do nice things in Hype.

Just one thing: for the Moon always facing Earth, we need to add a rotation of 360°.

When I do step 7, regardless if I make a basic move from left to right or right to left,
When then I paste the Elliptic shape, it always rotate clockwise because it seems that the drawing order of an Elliptical shape in Hype is Top, Right, Bottom, Left.

But the Moon rotates counterclockwise if we look from the Top. Is there a feature in Hype to Reverse the path? I don't see it.
I tried to rotate the Ellipse on the Y axis but the Ellipse is then shifted slightly to the left.

There's not currently a way to reverse anchor point ordering or set a first anchor point, though these are on the list to do.

I tried to rotate the Ellipse on the Y axis but the Ellipse is then shifted slightly to the left.

I'm not sure I follow - you should be able to move the group to align the motion path to match, even if it is rotated 180 degrees.

Alternatively if your motion path is on a different timeline, you can have an action play the timeline in reverse.

It's because of the default Perspective effect with rotations.
I disabled it.

To solve the problem, I grouped everything and rotated Y 180%. But then I need to rotate the opposite way all graphic assets. Not the easiest way to do a Earth-Moon system.

Fixing the rotation direction with the Y rotation on each symbol and by disabling perspective.

Next step: making it faster or slower depending of the position on the orbit… Youhou...

Haha yes this can be taken quite far :). Though I do imagine you could take a linear timing function for the animation and just change it to curve a bit in the middle?

To make a Solar System, we really need the ability to reverse direction of a path.
I created my demo file without taking that into account and then when it is finished I rotate individual elements when needed but for some planets it's complicated because of the moons.

What as designers we need the most in Hype:

Thanks for the additional requests!

View > Center on Scene or Command-Option-Shift-\ for this one.

A button near the Zoom field is easier and more efficient than a shortcut.

Selecting and moving the Transformation Origin Point should be done all the time when the object is selected and not only when we click in the field and without the Cmd key.

Just as a point of clarification - holding the command key is Transform Mode which changes controls for items that effect the transformation: scale, rotation, and transform origin. This is why it shows for this mode.

A button near the Zoom field is easier and more efficient than a shortcut.

I've filed a todo item for a toolbar button. Thanks!