Hi all, I want to do a simple animation of a door opening. The door opening is parallel to the viewer, so it doesn’t need to be animated at any arbitrary angle. The caveat is that I’d like it to have a small thickness, though detail will not be crucial.

I assume I can do this by rotating a simple rectangle (perhaps with a thicker border) along one axis?

A thick border won’t make a difference as the object has no depth and when it swings on end it will disappear (if that is why You wanted a thick border).

But You could add an animated rectangle that grows wider (door thickness) as it follows the door swing. 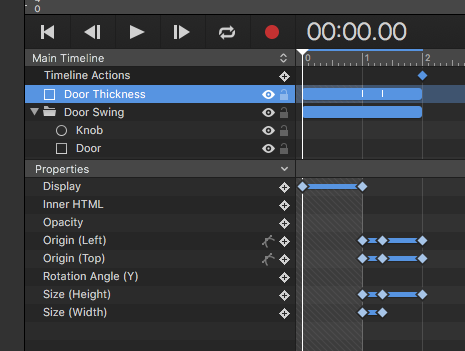 The door itself would have a rotation angle on the "Y" axis with its "X Offset" transform origin set to 100% and the "Y Offset" at 50% for a right swinging door.

The screen capture below is an example from the attached “rough concept” Hype project. You could make the knob “2.5D” by adjusting its width and have it follow the door (not done in this demo) much as with the door thickness.

At best the effect might be “good enough” after finessing the details.

Hey that is cooler than mine! I just made my entire animation in Motion 3 and then saved that as a GIF. Not as cool as that, but an option. You can see it on my page under the Nerd Vault button.

@JimScott Thanks for taking the time to prepare and share!! This is exactly what I was envisioning but was having trouble conjuring up the mechanics.