Able to start a timeline in external onpage Javascript?

So i'm working with rich media format templates on Weborama.
For a project I'm working on i'm making an interscroller, Example: Interscroller example

Basically, its a fixed position in a scroll position in the article. Many designers just use a simple static image, however the stenght of this format is the option to create animated and interactive content.

As the interscroller positions are often placed somewhere in the middle of a webpage its desired to start playing the timeline animations only when the advertisement is in view.

As shown in the example above, Weborama provides templates that allow to do this. As I looked at the code of the example, its possible to start the animation when its in the viewport 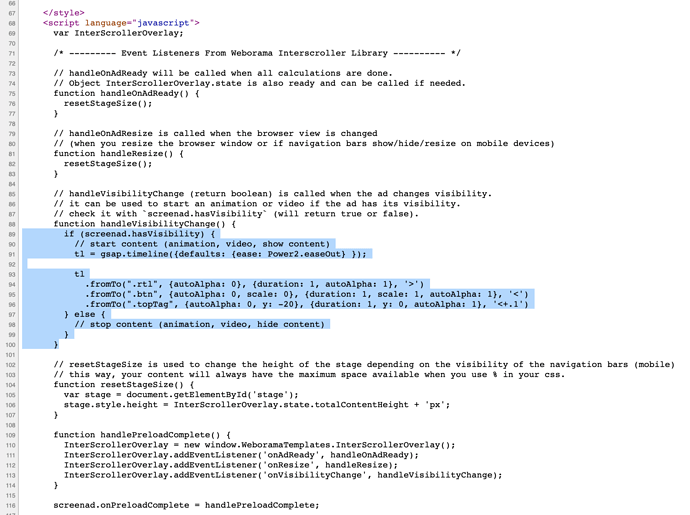 Is this possible to do? and if so, how what that look like?

From looking at the hype API, i figure it needs to be something with this
hypeDocument.continueTimelineNamed(timelineName, direction, canRestartTimeline)#

Hope someone could guide me in the right direction

Since you're outside of the Hype Document context, you would need to target the ID of your Hype document and run that function:

A bit more info on this process in this section of the docs: Tumult Hype Documentation

Since you also only want to try to start the timeline after the Hype document has loaded, you'll need to make sure that a HypeDocumentLoad event has been detected. You can do that with this function:

thanks for the fast reply, I wasn't aware of the invoking API from Hype, thats exactly what I needed!
I'll give it a go, and post the template once I'm done

with a space, exactly as you see in the UI*:

* it will in fact accept localized versions, like "主时间线" or "control temporal principal", and also robustly accepts any capitalization, but these are not preferred forms

One is missing that also works...

Allowing to use the examples as included when double-clicked in the API inspector.

Sidenote: Personally, I am not a fan of localized names like that … it leads to many problems. In Hype this is limited to the main timeline, but it is/was awful in Adobe After Effects as they even use localized API names. That often leads to weird errors when opening a file in another language that contain JSX commands. I think they fixed some of it with lookups (like the Hype runtime), but it certainly doesn't help with a consistent learning experience for people that work international or exchange scripts, files and tips & tricks globally.
1 Like
jonathan (Jonathan Deutsch) August 6, 2021, 9:42pm #6

Sidenote: Personally, I am not a fan of localized names like that … it leads to many problems.

Agreed; it was really a bug that they were originally accepted. Since this bug worked its way into API, we have to pretty much maintain it forever

. But like I said, these are definitely not the preferred forms - "Main Timeline" should be used for code consistency.

I've tried implementing the snipped you've posted above, but for some reason I can't get it to work.

What I've setup now I made a new timeline I want to play when the ad is in visible, I've tried this in the screenad visibility function

But it doesn't seem to want to work as can be seen here in the example (Scroll down in the page): https://previewer.weborama.nl/preview/yP0z
It stays at the orange screen, and doesn't play the yellow timeline that I animated in at the ScrollTimeline timeline.

Did I do something wrong with the placement of the code?

It is a little hard to test with your setup since there's the iframe and ad interactions, but I see there's an issue in the kickoff line:

Specifically in external code the hypeDocument in hypeDocument.kDirectionForward isn't going to be defined, since that is usually just an argument passed into internal Hype functions. It is globally referred to as the HYPE.documents['TestDocument']. So the code should actually be:

the forward direction is a default argument though, so you could just use:

Beyond this, it seems like you might also have flexible layout issues - I can see the timeline run if I modify the .html file to work correctly, but the yellow background doesn't quite show up the way it seems you intend.

I'd first try getting the interactions all set while previewing; you can use the developer console to try running the HYPE API there and make sure it works as expected. Just note that the document name is always 'index' - as in HYPE.documents['index'].startTimelineNamed('ScrollTimeline'); in the preview environment.

I got it working with the refined kickoff line you posted. The issue of the yellow timeline was a fault in the hype projects (responsive settings i figure), not with the HTML page. Here I got it working

Background changes color when it comes in view

Awesome - works for me! Glad you got it.