To catch up on the book project, I dedicated two days to work on just “A Book About Hype”. But when I woke up today, it was rainy, dark and cold. I didn’t feel like writing. So after sitting at my computer for about an hour, I realized something – I don’t have a cover yet. So, I started working on it.

My original idea was to create an illustrated view on New York City… Staten Island Ferry, little Coast Guard gun boat, some pretty buildings …but I ended up doing what I’ve been doing with the book. I like the look of simple shapes and bright colors. I kept the blueprint look though. Most of the Interactive examples are on a grid. So, I think the cover reenforces the overall theme of the book. I also think it looks pretty good.

I hit the “Publish” button instead of “Preview”. I was impressed. iBooks altered the cover image to make it look like a hardcover textbook. Wow, this is getting real. The book is about to launch soon.

I started thinking about printing a hardcover copy of this book, but that doesn’t make much sense. The interactive examples wouldn’t work. That’s basically the main attraction of the book. I recently created a “controlling” example. Wow, I’m so happy with it. I’m starting to make basic video games with Hype. Once the book is done, that’s probably what I’ll start working on next.

as less is more … why not just ‘About Hype’

it surely will be an iBook as published there

so excited for this project to drop… but just curious… has anyone come across this book yet
It not in english so i wouldn’t have any use for it. but thought it might be worth sharing with the community. 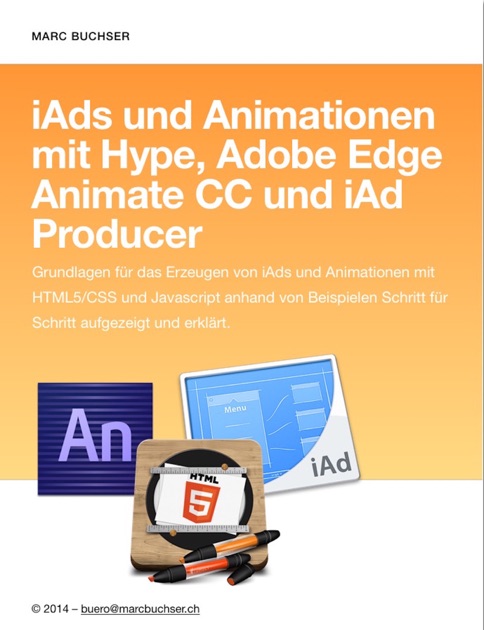 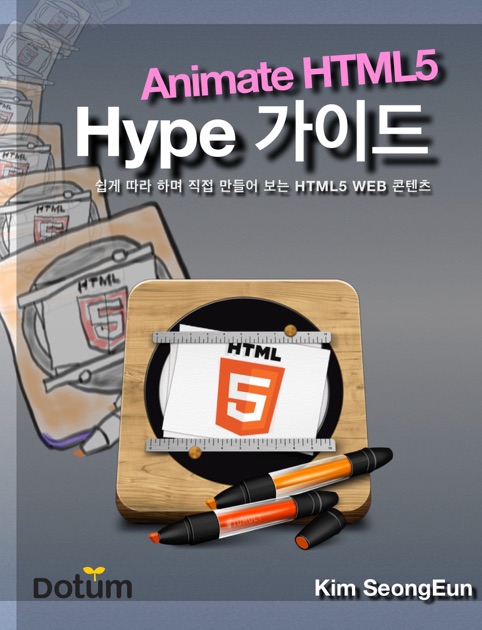 Hype 가이드 by 김성은 on iBooks

Read a free sample or buy Hype 가이드 by 김성은. You can read this book with iBooks on your iPhone, iPad, iPod touch, or Mac.

why not just ‘About Hype’

If someone is in iTunes and looking for a Hype book, then they’ll probably find the book. The title was chosen for search engine optimization and listing in iTunes / iBooks. The iBook Store tends to favor alphabetical names, so “About Hype” is good. However, if someone is searching Google for “A Book About Hype” then this book should rank highly.

The comment by @Djon reminded me of Spaceballs, the part about “Instant Cassettes”.

How can there be a cassette of Spaceballs: The Movie? We’re still in the middle of making it!

but just curious… has anyone come across this book yet It not in english so i wouldn’t have any use for it.

The first book doesn’t seem to be just about Hype. It seems to be more about iAds and apps to create them. (The book appears to be in German, so I’m not sure.) The second book is a dedicated book about Hype, but it’s in Korean. So sadly, “A Book About Hype” won’t be the first book about Hype.

So, there are some pretty strong advantages with “A Book About Hype”. As far as I know, this will be the first published Hype book in English and it will contain the latest information on launch.

I don’t typically comment on upcoming releases or features, but this will be in 3.5, which is Coming Real Soon Now™.

So, it’s pretty obvious that the next version of Hype will be called 3.5 and it should be arriving soon. This also reminds me of Spaceballs Instant Cassettes.

When will then be now?
Soon!

There are 23 Hype generated widgets in the book. I have 4-9 sections left. If I finish the book before Hype 3.5 launches, I can keep working on the 4-5 bonus sections. 48 sections (5 chapters + part of chapter 6) are completed so far.

Today is Xcode day. Very annoying! But since Hype doesn’t export to app directly, I felt that the “Publishing” chapter should have a section about it. I was dreading this chapter for two reasons… Swift and WKWebView.

@nick already has a great Hype / WebView tutorial online. I was tempted to just write the following…

The Internet is loaded with lots of tutorials on this subject, so it was tough to create a unique perspective on the matter. I think I do have unique way to present the information.

A big problem that I had today was working from an older project. At first I was impressed. Xcode updated the Swift code to the latest syntax… how nice. Being able to run apps on my iOS devices, without having to fumble with testing provisions, is also nice! Yet, lots of errors were being tripped…

I was especially annoyed at how Xcode makes it difficult to cut-and-paste the error. I solved the problem by starting from scratch. Same code, new project, no problems… well… not the same problems. HA HA!

All this frustration reminded me of how long I’ve been creating webview apps. My first app was an Android webview app. That was about seven years ago, so I’ve been doing this for a while.

It’s surprisingly tedious to do this stuff, so hopefully the book makes it easier for people. I’m ready to get going on app development too. I have lots of ideas for new apps.

I’m getting anxious, as this is pretty much it for the core of the book. I should be done this weekend. If Hype 3.5 isn’t released soon, then I’ll start working on the bonus sections. Although, I did get something of a warning email from Apple…

To prepare for the winter season, we’re adjusting our deadlines for book deliveries. If you plan on releasing new books on iBooks in December 2015 and January 2016, check the following delivery deadlines:

I’m ready to launch the book this month, I could even be ready by next weekend, but I have to wait until Tumult upgrades Hype.

Really looking forward to your book.

You may also want to look at my Xcode project that shows how to control hype elements and vice versa.
I wrote it a short while back so I have probably learnt some things since ( like getting into swift ) and it is in Objective - c but it may be helpful to you.

The book needs a solid review, but I can do that this weekend.

the pressure is on

I doubt if @Daniel or @jonathan are rushing the release of Hype 3.5 because of my book.

You may also want to look at my Xcode project that shows how to control hype elements and vice versa.

It was a tough decision, but I left that part out. The Xcode section is just about getting started. It shows how to export from Hype to app in the simplest way possible. I could have gone into iOS version detection, for WKWebView vs UIWebView. I could have gone more into publishing an App on the app store. Communication between the Hype project and the containing app is also an awesome topic. I stopped myself because this is “A Book About Hype” – not Xcode.

I ended the section with a link to the “Features Request” forum, as I feel that Hype should export to Xcode automatically.

After working on this book, I have an idea for a Christmas project. That probably should launch Thanksgiving weekend, if it’s going to work. That’s only two weeks away! I’m really tired though, so I might have to save it for next year.

Michael, will there be a way to purchase the book directly from you? Or do you prefer we use the app store? Also, do you need any proof readers

Also, do you need any proof readers

This is a dead man switch. So if I do nothing, and Apple approves the book, then “A Book About Hype” should launch on Black Friday. It’s important to note that this does not influence the launch of Hype 3.5. They launch when they’re ready. A lot of work is going into the beta and I think it’s something the community can be really proud of.

Michael, will there be a way to purchase the book directly from you? Or do you prefer we use the app store?

It was a tough decision, but I think the iTunes Book Store is a great place for the book. While DRM is annoying, Apple has one of the least annoying ways of managing it. Additionally, they have Volume Pricing. This is useful for education, as there appears to be some classroom interest too. Also, Hype is mainly Mac App Store app. People that use Hype probably have iTunes accounts.

I was considering FastSpring (Tumult uses this too.) but I think Apple might favor this book. Hype is a Mac exclusive and it’s a great tool for iBooks. So, that combination might catch the attention of the review team. They might like that “A Book About Hype” is an iTunes exclusive.

German translation of the book has resumed.

So, this is looking like happy holidays. I’m planning to send out notifications on Black Friday. That’s a big shopping weekend, especially considering Small Business Saturday and Cyber Monday. There are massive iPhone / iPod sales that weekend, with all the great Black Friday sales, so climbing to the top of the charts around this season is huge.

Hopefully I didn’t hype the hype book too much. HA HA. I am excited about it though. I like how it turned out.

Looking forward to it.

Same here; it will be good to see your final efforts. No matter how much we use Hype, there are always more ways to learn how to utilize it. ~ John

YAY! I got my pre-order in via iBooks on my iPad – Thanks Michael, I’m looking forward to a good read.

Preordered!
Last time I ordered a book about software was ages ago.
Very exited about this one!

Apparently, iTunes is accepting pre-orders. I tried to prevent that. The idea was to create a launch day surge. Unfortunately, I read the “Foreword” again and there were some issues with it. I cleaned it up and uploaded version 1.1 of the book. Apparently, that turned on pre-orders.

Hopefully that doesn’t hurt the book’s rankings. I’ve been doing this for years and I always seem to run into launch day issues with iTunes. It is an exciting time. This might be a non-issue. I think Apple might use the sales for a week to determine what’s featured for the following week. I’m not sure though. They seem to like what they like. HA!

But regardless of that minor issue, thanks @gasspence @Olav and @peterdanckwerts for pre-ordering the book.

The plan is to send out a message to each of the 48 people that liked the first thread, and to those that contacted me directly. That’s to happen on Friday morning… perhaps as early as 12:00 am Eastern. I’ll also be sending out an email list to Photics.com members on Friday too. I think the last one I sent was April 2014, so I do try to keep my mailing list neat.

I noticed that some people from this website tried to register an account for the Photics.com site. It seems that they were unsuccessful. I wrote an article about that…

TL;DR – Anti-spamming methods were too aggressive. I changed the settings and site registration should be easier now.