I’d like to put in my scene a white image .png that I can to give it a differents colors, like for example a “color picker”.

What aspects of a color picker are you trying to recreate? Can you explain a bit more about what you’re trying to do?

Here is a thread on the Forum that appears to be similar to what You are asking. In particular look at the very last Hype project on the page by @strmiska. This example uses SVGs but You may see a way to shift it to “.pngs” - or decide that SVGs are the better route.

for children i want them to let them paint canvas-figures. it seemed to work by only using hypes symbols. from illustrator i exported canvas-code and placed it in a rectangle to get the canvas. but i´m not able to pant this canvas. i tried @h_classen canvas painting tool - great work - but not what i want to do. my work is much simplier

so does anyone have experiences with this? here´s my example - choose your favourite color: paintCanvas.hype.zip (644,5 KB) thanx a lot

Here is my take on a colour picker.

This loads an image into a canvas. Then uses the pixel data of the canvas to get a colour.

The functions to find the pixel data is pulled form the internet. ( To save me writing it ) 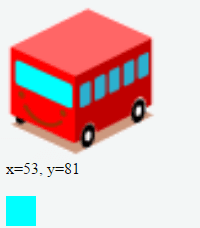 Learn how to retrieve the color of a pixel on a canvas element using javascript with different mouse events.

But has some changes to work as a colour picker.

Personally I think now we know what you are doing @h_classen’s simple method may work better for you as you have contol over the colours that can be selected.

Also it allows for simple control when used with Mobile devices.
The example I give can be made to work with iOS ( I made a test version for that, not posted) but can get complicated.

often the real usecase is very unclear or even missleading when a topic is created.

We can populate a Group/Div by cloning a rectangle element.
We add a click action to each clone.
Tooltip
And attributes that may be handy in knowing the chosen colour. 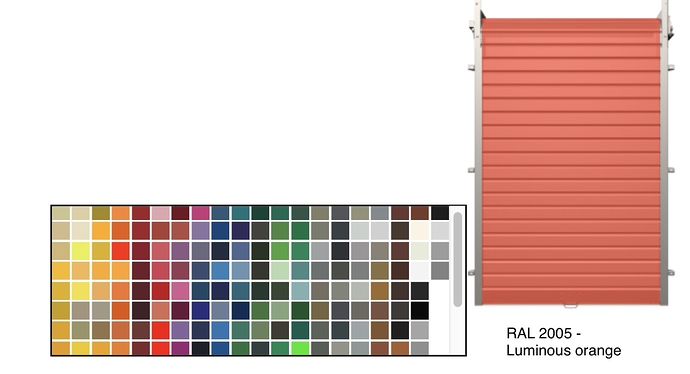 Just did a small update. Pallet need to be above your image element.

This is because the original is working with and looking for element ID’s on a single scene.
ID’s also must not appear twice.

When you use mutiple scenes/Layouts you often need to use class names instead.

One issue is to know which scene’s or layout’s element with the class is wanted.

In my original code in the head there is an extension that helps track the current scene element.

The code in the Clone() is now adjusted to look for the correct class elements on the scene layout.

The elements which had id’s have now class names instead including the ‘path’ in the door.

Thanks perfect ! All done !
A little thing, when mouse over on square color, show text " undefinited ", do u know how hide it ?
Best

You did not use the colour name in the RAL coloursArray.js so you need to remove the three lines in the Clone()
that either declare or use the var colAttrib

Yes, only I deleted this line

You would need to look up on the web for scrollbar color css.

For arrow left and right, are you talking about no scroll but have navigation arrows eitherside?

Wow, just what I needed. THANKS!