the simplest setup i'd think of bypassing an HypeEventSetup may be

That still requires on Hype Function for every parameter variation, and it still pollutes the signature of the function you want to call. Meaning your just forwarding the "problem". Hence, you could just do the calls directly in the Hype function to begin with.

But the idea is good, and I often use the approach by getting my parameter from a dataset value in the context of click actions. This makes the Hype Function reusable. 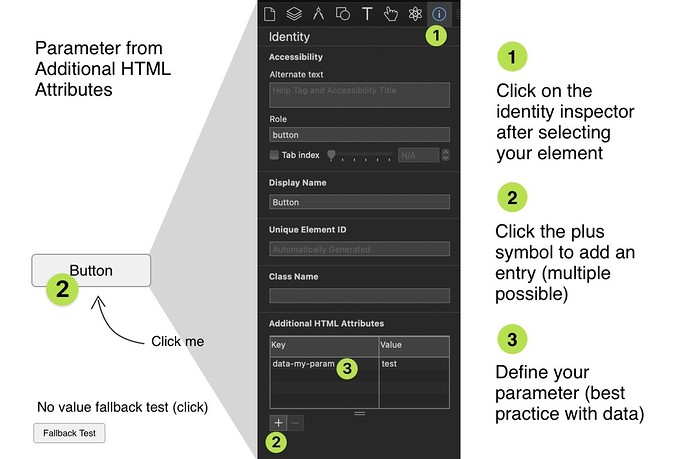 To chime in here - I understand that being able to use an arbitrary function with arbitrary parameters from Hype's UI would be beneficial.

But I think this thread has folks with a lot of different cases and may be over-complicating/obfuscating the common and simple solution - if you want to do this, just define a new function and make the call.

Fundamentally it is good to boil down to the fact that from a labor standpoint, this is not going to be any harder than fiddling with UI popups and gives extra benefit to being in a code block so you can easily add extra flexibility should the need arise.

Of course, there are three general issues:

HypePowerPack and the Custom Behavior workarounds are often great solutions for more complex documents that try to help solve some of this, and definitely should be considered if you have more complex flows. And kudos to @Henry_Tap for the mockup.