How to create a small survey

Hi, is it possible to create a small survey with predefined results?

For Example: 3 Questions with 3 possible anwersbuttons which the user chooses from.
At the end there should show up one of thee possible result screens.

Whats the best way to create this? 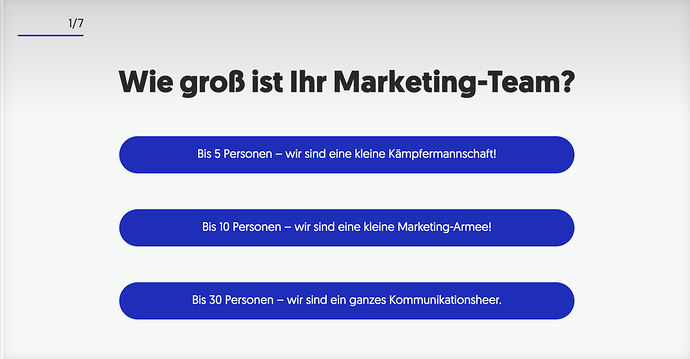 one possible way: HypeConditionLinker: Perform actions based on AND/OR conditions without JavaScript code

several others out there ...

Hype Petite Vue… is also an option. Early days but should work fine.

Here is a version that works. For now it does a hard clone to destroy v-on events*… please check: HypePetiteVue_scopeAndSymbols.hype.zip (154,4 KB) Feedback welcome. I opened a discussion on GitHub about it. Hopefully there is a better solution down the line but for now it does the job. Beware, It does destroy all event listeners, also from third parties. It only happens on scene changes and has the upside to mirror Hypes own reset behavior. If you need values to “survive “ transitions just …

Crude example of a Questionnaire in Hype Petite Vue. Could obviously be done even nicer with subcomponents and symbols, but I wanted to keep this example simple. Download: HypePetiteVue_Questionnaire.hype.zip (71,5 KB)

Also, there is another idea that revolves around simple layer visibility and custom behavior if you want to avoid getting into Vue programming here:

Thanks so much for your hints!

Hi, is it possible to create a small survey with predefined results?

I didn't answer this one right away because I wasn't sure if you wanted to send the results to a server. But if the results are static and predetermined, you could just create a lot of scenes...

13 scenes for each possible question and solution.

But if you want to make it dynamic, there are two templates at Photics.com that might help...

With the release of iOS 11, many of my original iPhone / iPad / iPod Touch apps stopped working. 64-bit...

The "Book" template is very similar to what I just described, except it includes the use of JavaScript and Data Attributes in Hyperlinks to control scoring and scene changing.

While perusing the Tumult Forums, someone was having trouble with animated buttons. The idea was to animate the active button, then return...

The "Capitals" quiz seems very close to what you're trying to do, as it generate questions randomly and dynamically. Basically, it reads data from a local array (somewhat similar a database) and then shows a score result at the end.

So, if you modify the template to match your idea, it seems it could just be a matter of displaying certain text based on what someone chose.

...but if you want to collect this data, I probably wouldn't use Hype. That would involve communicating with a web server, which has lots of potential pitfalls — especially if done wrong. I use Ninja Forms on WordPress for basic contact forms. If I had to build something advanced with conditionals, I'd probably use Webform on Drupal or perhaps one of the many websites that offer such features.

With a little CSS, and an iFrame, an external form could look like it's part of a Hype project.

Hi Max, i looked at Petite Vue and its pretty cool. I looked at the code but i cant get it the way i want it ...

What i'm looking for is fe... a questionaire "what kind of hype user are you?" at the end of the questionaire you get the result "starter", "medium", "profi"

Do you have any idea how to manage this? THX!!!

This looks like your comparing an "answer" string and need specific results. So, if your answer is not based on correct or wrong answers, just append each answers to a string and compare the answer in the results screen.

Now you can either work with v-if, v-else etc. or create a function that returns the result you want using a switch/case logic.

add a scene for each question.

you should be able to figure this out ... no need to overcomplicate things

thank you very much!!

If you use the Vue version I would add the variable in HypeDocumentLoad (much like correctAnswers) and the function in Questonaire component like object or as Vue syntax in a rectangle. Depending on your approach.