Scroll through all scenes

Here is a way to scroll through all scenes:
ScrollThroughScenes.hype.zip (54,6 KB)

Awesome! It'd be good if scrolling up kept on the first frame of the first scene - right now it goes to blank (I assume trying to change to a non-existent scene?)

It was actually the first scene I used for setup and was blank and shown at percentage zero (scroll). I removed it and the setup() is now done on scene A. One could use a document load event handler in head, but I didn't as I was using it on WordPress. Upload was updated. We really need a Hype Document Load stack in the document inspector

also scene/document infos in the API.

Here is also a nice snippet to avoid over scrolling at the borders (disabling the elastic band effect):

Put this in Head HTML:

There is also a version on GitHub: 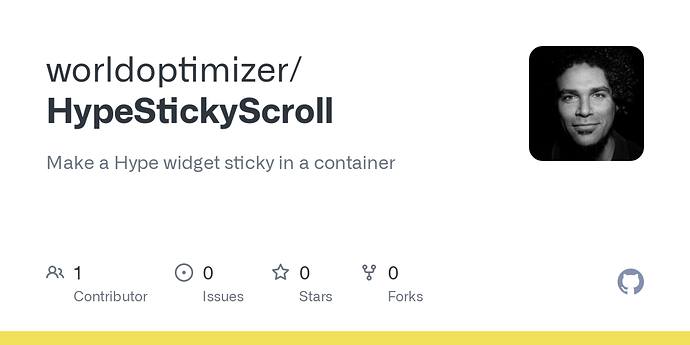 GitHub - worldoptimizer/HypeStickyScroll: Make a Hype widget sticky in a...

Make a Hype widget sticky in a container. Contribute to worldoptimizer/HypeStickyScroll development by creating an account on GitHub.