I have to say though that it is remarkably easy to move the project over to Xcode. I am putting together the how to and I hope you all will get some value from it.

A million thanks for this! This will be helpful for a large number of people. Feel free to get in touch if you’d like to work on this together.

Daniel,
Thanks! I will send you a draft over to you tomorrow Thur am at the latest.

That looks very very interesting! I’m looking for “how to” a lot!

Do you have a link to your step by step instructions?

We are all looking forward to the documenting for Xcode with abated breath, let me know if you need any help with testing or anything else.

I will have that webpage posted by Thursday of this week.
I am making sure it is cleaned up along with code you can cut and paste into your own project as well as a couple of screen videos.
I will post the link in this forum and also send direct links to all who have shown interest.

Marked and noted I hope you all find it helpful!

Oh here is the Table of Contents Draft.
The site made in Hype of course 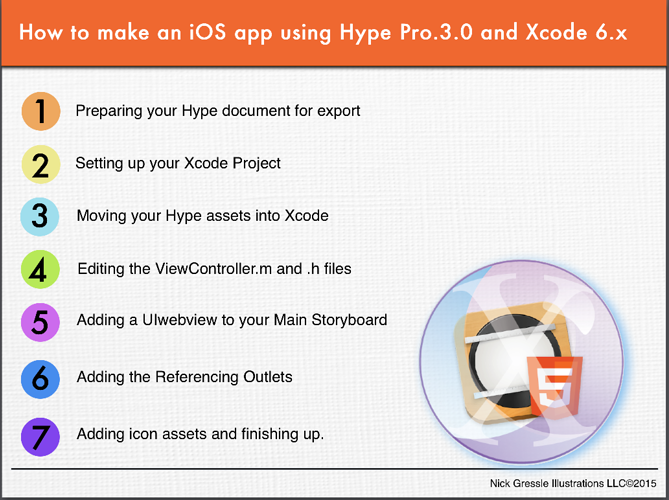 I moved a post to a new topic: Embed a Tumult Hype document in a Webview for publishing on the iOS App Store

Nick, that is great (Fantastic) - thanks for doing this tutorial.

Greg Thanks!
I am updating that right now should be done in 30 min.

Thanks for moving this!

Hi Nick, this great news for lots of us. Well done indeed and look forward to your ‘how to’ post

Geoff,
Glad you like it I also posted it to Youtube and Instructables.com as well so hopefully it will help you with your apps.
I am still working out the kinks in a tutorial using SWIFT but that shows real promise and is even easier.

This is great stuff that a great many of us can use. Thanks for this.

Coming from the marketing side, I suggest a name change to something people can remember and spell so that they can find it when they are looking for it on the App Store. It may be too late, but If people can’t find it, they can’t buy it.

@nick how has the sales been? Would be really cool to hear from you on how it’s been doing.

Ha yeah, to be honest I wanted this to be a concept piece, and if I made Starbucks card reload money I would be happy

I have a much bigger project that is an interactive kids book so this was my way to test the waters with Hype to Xcode.

The game Hnefatafl is such an old artifact of pre-chess that it really only appeals to hard core followers of Viking history and the game itself.
I was drawn to it as I love chess and wanted to research which games led to the development of modern day chess.

Saying that… sales surprised me. I was able to pay myself back my $99.00 apple developer fee since it’s release so all in all I am pleased.
Regionally I have sold more in Norway Finland and the UK than anywhere else which makes sense. Many of the Hnefatafl tournaments are played there,
I do plan an upgrade to it this summer with a training mode using a simple javascript AI so we shall see how that goes.

Another thing I have noticed with Hype Pro… folks wanting to push Hype further in the game space and I think a lot of simple games can be made this way. If you are looking to make “Doom” or “Sonic” Hype is not there yet.
But thinking of new ways to challenge the casual gamer you can make lots of games.

I will be releasing another small game for kids 4-7 shortly between now and the big app/ebook release and will post the tutorial on my process in Hype as well as the Xcode and Android ports.
Can’t wait to share

Go Nick! Glad to hear this.

Also anyone wanting to make games consider reading this book/ebook
This goes over the fundamental building blocks of Game design…not video games but Game design itself.
Having the basic foundation Any Hype practitioner will see that you can make bunches of new game concepts with the tools that Hype Pro provides right out of the download.