The Next update of Hype Power Pack will include an extensible plugin structure.
You can't have multiple export scripts run because they could interfere with each other if they all move files around while modifying the staging path or rewriting URLs etc.
The solution for Hype Power Pack is as follows: 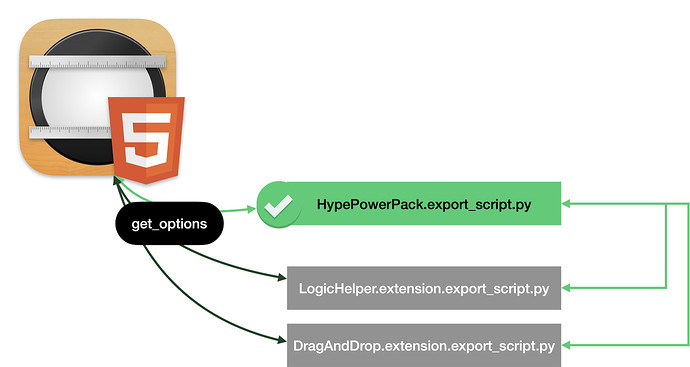 Not sure for me how high this is on the list.
But I have found this an issue in the past and even then it was because I was using two of the same scripts with different selections and out comes but clashed when run together in the ui.

My solution was to remove the scripts from the script folder that I did not need at that time.. But that is not ideal.

Maybe an on/off check box in the Export Script pref for each script.

Maybe an on/off check box in the Export Script pref for each script.

Nice idea for Hype Power Pack… for Hype itself you already have only the one script rule. Not sure how you activated two…

Not sure how you activated two…

Nor am I, It was a while back.. It may have been I had both listed in the prefs and was not sure which one was running, I am also sure I had multiple listed in the export menu. (yes a making of my own mess )

yes, of course this can happen

but one exportscript excluding all other is also semi...

... and your solution will be a solution just for your scripts if i read the graphic right

No, it is an open structure and open source but @jonathan is certainly thinking about extensions (new format)

*disclaimer: I am not speaking for @jonathan or do I know anything concrete. I just happened to write to him about it in regard to Hype Power Pack, and he shared some general thoughts but stayed as vague as ever about concrete implementation, dates and roadmap. Just to make that clear! I am hoping he will consider in a timely fashion some of my immediate request for additional extra action formats like dropdowns, checkboxes, behavior selector, color picker and angle wheel etc. and form element id's (is currently unfortunately the label and function signature). The same would be great for document arguments.

... and your solution will be a solution just for your scripts if i read the graphic right

No, the graphic describes the core problem you are having and why you probably made this request. Hype only runs one export script for a reason. Export parameter like get_options are non-destructive and inform Hype about settings the export scripts has. But most other commands (like modify_staging_path etc.) would interfere which each other and are executed on previews and exports (if allowed). For example, if your script zip's up all resources and moves them to their final destination the next script wouldn't find anything to process anymore. Hence, if you want to leverage export scripts as an extension facilitator you have to by design have a single master script. What I finished programming last night (proof of concept) was a tweaked version of Hype Power Pack that considers other export scripts using the.extension.hype_export.py as child scripts. It forwards certain calls to them but in a compatible fashion. They are full export scripts only that they are ideally set to not clutter the interface using:

Hence, the lines in the graphic labelled get_options are direct queries sent to the export scripts by Hype. The green square lines in the back are "forwarded" commands while exporting … the are managed by the main export script. Hence, Hype Power Pack becomes a package manager for the time being. If Hype ever releases official extensions this kind of package management won't break, though. As much as that, was mentioned by @jonathan : He will keep export scripts up and running for the foreseeable future.

This is absolutely a good request that I think is fundamental to expanding Hype's power.

A while ago, @MarkHunte contributed a PR to an export script that made me think the right way forward was to allow chaining in some way:

Unfortunately, Export Scripts are meant to be the end point for an export, and as such weren't designed to be combinable. Many will mangle the export in a way which can't be passed to another.

The way forward would be a newer mechanism that has better guarantees about how they add to the document. After installation, these extensions could be easily enabled/disabled on a per-document basis. I'm not trying to be vague, but it is difficult to say precisely what this means until after it has been implemented

I've been able to develop these ideas further in chatting with @MaxZieb, relating to his Power Pack. A lot of what he's considering there are the same considerations for this feature, and I'm hoping that in the future items developed for the Power Pack can be easily transitioned to the new combinable extension mechanism.

To max out my limit on consecutive posts: As a future extension format would anyway not be running file manipulation like Python. Therefore Hype Power Pack is mainly concerned with extra functions and document arguments. It creates a multi facetted and pluggable environment for all things front end.
To have a final say in packaging one could think about publish child export scripts to manage final output and packing. As only running one of them makes sense it would be be a single field that determines the script with final say and specially tailored for the task.