Do I still need post-its? At a computer? Why?

This is self-explanatory... I have long wished that it was standard for all creative software to have a place for user notes. Either global or project based (I can see arguments for both, so why not do both?).

It could live here?

It's just one of those handy things that I kinda can't believe the software world isn't already doing on a very large scale... for generations.

"Oh, I don't want to forget that techinique/link/trick... where are my post-its?" is a thing nobody should be saying in front of a computer

I sometimes stick a note.txt in the resources and use the edit with..
But it is not convienent enough to use all the time.

A notes tab would be useful. Even very basic functions.
What would be good is the option to include it with export.

If I am honest I know these as textfield->field editors are realativly easy to had to an app but that does not mean it would be for hypes build.

But yes very please if it could be..

There is no need to bloat every single app with yet another note function. Just use ...

Ghost note looks interesting... It's trying to address the need (which there clearly is) on a system level but is clearly document-based. A bit like writing in the margins.

Unless it travels with an application, it's not useful enough for the purposes I describe... meaning, it would have to have a note window that opened with the application itself... but has to generally stay hidden unless needed... I don't get the sense that ghostnote does that.

I've typically used OneNote to keep application based notes... but the fact is, I don't use it enough because it means switching applications. The fact is, folks don't like to switch applications... hurts productivity, derails thinking, etc.

Have you used some kind of notes/scratchpad feature in an applicaiton before? (you said "yet another", so it sounds like you have). Can you point to some? I'd love to check the implementaiton.

On the contrary: in-application based notes require each application to come up with its own system and interoperability will suffer. Notes might travel with the file but it is certainly a niche product. Look at notes in Photoshop for example. Best practice is writing your notes in code and documenting your functions. I use JSDoc notation for that. Comments are part of the source and stripped in minification. If you want to keep information that is not public as notes it shouldn’t be part of the file to start with and Ghostnote does the job as it brings up the note while your working on the file OR use some collaboration system for teams like slack or a file management that can store meta information.

One older and open feature request are code snippets in the JavaScript/HTML code editor and they might actually be implemented in a future version of Hype as it’s already part of Whisk if I recall correctly. But that would be global and application wide rather than document specific.

Right... the Photoshop is, again, like ghostnotes, about marking up files.... probably becomes part of the metadata?

The notions all seem to revolve around collaborative functionality. My suggestion is not that.

I think it would be a mistake for a personal notes system to actually be part of the file which it sounds like you agree with.

The primary idea here is notes about the application that stay with the user.

One older and open feature request are code snippets [...] But that would be global and application wide rather than document specific.

Exactly. Since my idea is for an application wide note, that is a perfect example of how it could be used. If a notes section was already in the app... this open feature request would already have a solution... and unlike "code snippets", the Notes tool would have vastly more utility beyond remembering code.

I personally don’t feel it would be bloat.
Text editors in apps are generally very simple to implement. writing notes is not always about the code comments, which can become a mess.
Also not everyone minifies because in a lot of cases it not needed ( well in mine at least )

Not sure ... seems like we are running in circles here. If it’s local application notes but not document notes and not team notes. Just use any local notes app or text editor or wait until code snippets are one day added. Why would I have a functional dead text editor with global notes for the entire application. Seems pointless to me at least. I am quitting to engage in this discussion as I am clearly not getting it

I think to understand it, is to ask yourself why Amazon worked very, very hard (and spent millions, no doubt), to reduce the number of clicks between the user and a purchase.

When you say "Just use any local notes app..." what you are really saying is:
1- stop work on your project
2- find and launch another application
3 -find the file that contains the notes for the application you are working on (or create a new one)
4 - type your note
5 - minimize the note app
6 - get back into the original app
7 - try to remember what you were doing, and go back to work.

Solving this basic problem is a large part of why Amazon is the success it is.

1- Click in the Notes inspector.
2- Type your note (or read your note)
3- Continue work.

The difference isn't subtle... and can literally be the difference between working well, and not working at all.

Thanks for the request and the mockup!

As someone who works with code and UI, I can say that comments in code are a huge boon (even with downsides of them sometimes being out of date), and in visual mediums are a significant missing piece.

The right place to implement this is within a Hype document. I'm not sure we'd do top-level notes, but being able to attach comments to elements/groups, animations, or timelines, would be extremely useful for complex documents.

This was a mockup from another user (taken from a private chat) that takes the concept pretty far: 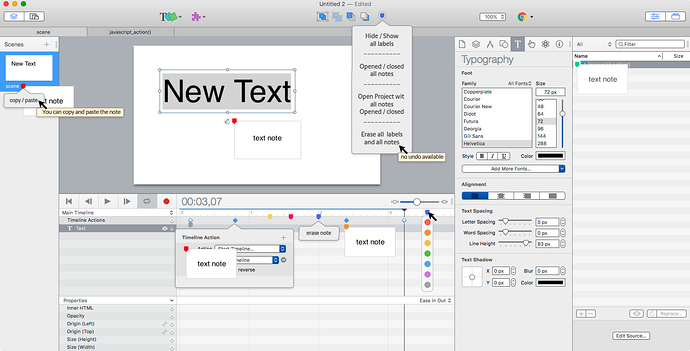 There's a lot going on - it more shows about the places notes could go than what such a feature would look like in final form. But the basic idea is that any item can have a colored dot + label note associated with it.