TL;DR — Many of you asked for it, so it's on the way. A digital version of A Book About Hype is in development.

Widgets is still the flagship app for Photics, but what if not? In the near 23 year history of Photics, the most successful project was The Unofficial GameSalad Textbook. It was an app book on the Mac App Store. Historically, the books do the best. Maybe it's the writing style, which makes it easier to understand complex topics.

What changed your mind?

There are four main reasons why...

There was an attempt to convert the book to an ePub, but there were issues. It didn't feel good enough. Instead, I'm thinking it will be very cool to say... A BOOK ABOUT HYPE IS MADE WITH HYPE!

NOTE: The plan is to remove the printed version of the book from Lulu on June 30, 2021.

Long time coming, though you made me buy the book when I was asking for a digital option

Im wondering what made you want to go digital? Reason why im asking, It seemed like there was no way talking you into doing digital version other than the reason you've mentioned.

It seemed like there was no way talking you into doing digital version other than the reason you've mentioned.

Apple approving the update to Revisions is the big reason. I wasn't sure if that was going to happen. For years that app was listed on my App Store Connect developer page with the warning icon attached to it.

...and yeah, I'm tired of having the same debate. A lot of people say they want a digital version. Look at all the likes!

(Thanks to everyone that liked the second post in this thread. That's very encouraging!)

It certainly wasn't an impossibility...

That was last November.

You asking for a digital version might have been the turning point. Not long after our conversation is when I tried relaunching Revisions. It worked! After that, I started working on this project. That was April. I'll be working on this project through May. While there's still a lot of work to do, being able to use the "Photics Book Engine" does make the job a lot easier.

Today I've been mainly working on improvements to the way the "Photics Book Engine" works. I think it's nice!

I think it's a brilliant idea to do the book with Hype.

One question, as it is a digital book made with Hype, will it be interactive with examples that we can inspect? It would be an incentive for those of us who already have the paper book to have something like this, more interactive and "practical".

One question, as it is a digital book made with Hype, will it be interactive with examples that we can inspect?

...but I think I'm going to include those templates in the app too. I'm not sure if there's enough time, but I am thinking about adding a few exclusive templates to the book app.

However, your question reminds me of something that I added to the Widgets app...

Three simple lines of code has made it so much easier to develop the Swift portion of the Widgets app. Do you see the part where it says "DEBUG"? This is something I added to make the project easier for me to work with. It lets me inspect the WKWebView in the app. I suppose I could add that setting to the app version of A Book About Hype. I'm not sure if I will do that, but this is something that I can investigate later.

Thank you very much for the answer. As with any creative project you have to take the space and time to feel what you need. Courage with it and I'm sure it will be a good app.

Wow, I haven't felt this excited about a project in a long time. Here's a preview of some of the features that I've been working on...

If there's available space, columns are automatically added. It's wild. LOVE IT!

It really shows off the power of HTML / CSS.

Oh wow, the "Wavy" template — Amazing. The transition is just so cool...

...that's an animated GIF. But in the book, I even added a wave crashing sound effect. So nice!

I'm still figuring out how to best manage the rest of the templates. I'm thinking most will simply be embedded on the page. This shows what's possible with Hype though.

It's not syntax highlighting, but @MaxZieb mentioned that he thought that the code formatting in the printed version could be improved.

Line breaks on code blocks could be improved

So, the digital version has better code formatting — with line numbers! 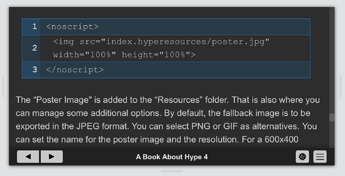 I didn't consider CSS real programming, but wow, that opinion changed while working on this project. CSS is powerful. There are a lot of amazing features, especially for this project. Scroll Snapping... with columns... MAGNIFICENT!

As with any creative project you have to take the space and time to feel what you need.

I've decided to breakup the project into three parts...

I'm a little behind schedule for the first week of the project, but I added a lot of the features I was looking to add. As an example, now there's an "Auto" theme for automatic switching between light and dark modes. 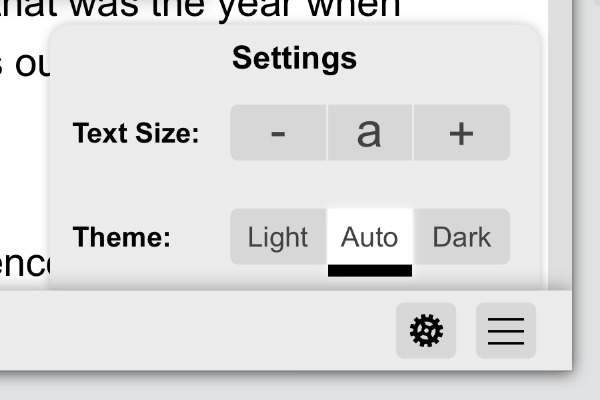 There is still a degree of uncertainty about hitting the deadline. If I feel more time is necessary, I'll delay the launch. Fortunately, I think meeting the deadline is still in the realm of possibility. I don't want to rush this one, but so far it's turning out better than expected.

...and I've been sending lots of feedback to Tumult, so they can make the app even better.

I certainly agree about the power of CSS. One of the best resources on CSS, and from which I “borrowed” several ideas for my site, is Lea Verou’s CSS Secrets. On top of that, her entire book is set out in CSS — not a page layout program, but good ol’ CSS.

It has everything you can do with Hype: Clip Path, scrolling timeline control, interaction, dynamic navigation and more.

Just a minor update. I didn't know that MathML is native HTML.

I was trying to add this formula, for calculating distances between two points...

...I'm probably not going to keep the bird graphic, but I am interested in keeping the formula. Apparently, that's possible...

The browser support is atrocious...

...but that should be OK for this project. This is a WKWebView app.

I'm getting tired, needs to be more mathy, but I was able to recreate the look of the formula...

This feels like it could be its own app... a MathML to HTML converter.