With this post I would like to start posting some suggestions that come from my use with Hype. Some things may not seem very useful, others already asked and not yet implemented, others still interesting.
My idea is to imagine what Hype could be like for my work and what I would like to be in it, putting everything “in writing”.

POINT 1 Every action should be commented on.

The user should be able to comment on every action on the Timeline. Comments near the action should have no character limits: the user can write as much as they want. In case there are two actions next to each other and the comment of one action goes over the point of the other action, the same comment will be clipped. However, if the user moves the mouse over the clipped comment, it should become visible in its entirety and return clipped as soon as the mouse moves away.

POINT 2 and POINT 3 Use colors for better organization of the elements.

Each object on the Timeline will have a very precise color (chosen from a series of colors that the user can use. I wouldn’t put limits to the colors that can be used to avoid that the user is forced to have duplicates, for example, when finishing the dafault colors). The colored dot next to the name helps to identify the object’s animation bar (also colored).

It should be possible to enter comments and write as much as possible. There is no limit to the number of comments you can enter.

The line can be enlarged or reduced (as in video editors) and inside the bar indicating the animation of the object the name of the same object can appear (or not). 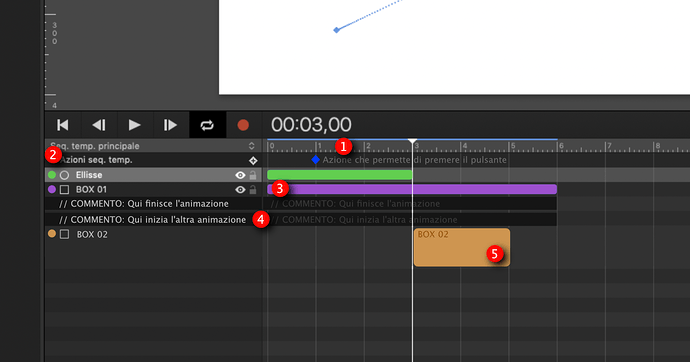 Thanks for the requests and screenshot illustrating your ideas!

We’ve long wanted to add comments (and coloring), but what I like about this shot is how integrated they are. Taken one step further, I could see benefit to them being free-floating on the timeline.